Today is the feast of St. Romanos the Melodist, one of the Orthodox Church's most celebrated hymnodists. He was born in Syria in the 5th century to Jewish parents. He later moved to Constantinople, where he became a sacristan (someone with the duty of upkeep and care of a church building) at Hagia Sophia. 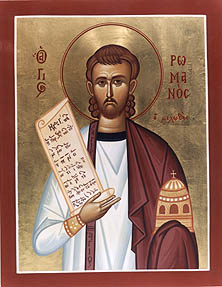 Romanos was not born with a good singing voice nor was he a talented reader. In fact, on one Christmas Eve during services he read so badly that another reader had to take his place. He was devastated.

The next day, grief-stricken, he went before an icon of the Mother of God. He was then granted a vision, where the Virgin gave him a scroll which he was commanded to eat. Thus, he was given the gift of understanding, composition and hymnography as well as a gorgeous singing voice. That evening he sang his first hymn (called a kontakia, in reference to the Virgin's scroll). We still sing this hymn in the Orthodox Church every Christmas:


On this day the Virgin beareth the Transcendent in Essence; to the Unapproachable, the earth doth offer a small cave; Angels join in choir with shepherds in giving glory; with a star the Magi travel upon their journey; for our sakes is born a young Child, He that existed before the ages as God.

This is a reminder that there is one historical/literary archetype that the three/four core classes of D&D don't necessarily do very well — the bard. One could argue that a bard can be accomplished by simply re-skinning any of those core classes. St. Romanos himself seems to be a model for re-skinning the cleric, for example.

Personally, the bard is one of those class concepts that really intrigues me. There is a lot of potential here — well beyond the poofy-sleeved-lyre-playing-fop. For example, I would argue that King Henry V, as portrayed by Shakespeare, is a bard. His oratory prowess inspires his small, rag-tag band of an army to smash the superior French force despite being vastly outnumbered. I have always been interested in playing a bard in a similar light.

Unfortunately, I have never been satisfied with any version of the bard in any version of D&D or its derivatives. I can't quite put my finger on it, but something in the concept, the mechanics or just the way D&D does combat just doesn't do the bard justice. Rather than have fun with the character (which I have managed to do with virtually every other class in the game), I always seem to feel that something just doesn't work.

Therefore, I am going to end with a pair of questions: