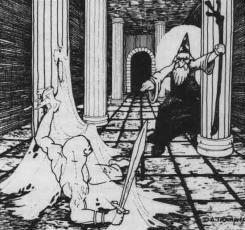 Obviously, these level titles indicate a very robust guild structure that (based on some of the comments from my last post) will rub some players the wrong way. Understandably, this guild structure is not for everybody nor for every table. This is one of the reasons I think level titles should be tailored to each campaign world (taking into consideration the temperament and desire for each gaming group).

This particular list is based upon the implied culture found in Holmes. Arcane magic is something extremely dangerous that needs to be heavily monitored. This is why there is so much cross-pollination and self-regulation implied in the rights granted to various levels. Although magic users working outside this structure run the real risk of being constantly hounded by authorities, it must be understood that players always have that option. While they might be able to find more freedom when it comes to the kinds of research they want to do, their resources will be severely limited — primarily to that which they find while adventuring.

Personally, I like these robust structures because they encourage player choice and creativity because it helps make their choices matter.