For those of you who are interested, here are the stats I used for the half-giants from the last session of my Lost Colonies campaign.

The giants were on the earth in those days, and also afterward, when the sons of God came in to the daughters of man and they bore children to them. — Genesis 6:4 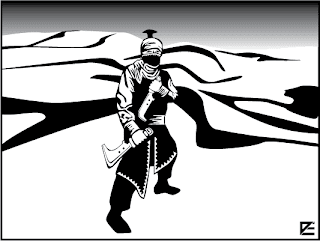 These desert-dwelling nomads are called half-giants due to their size, but are actually more closely related to goblins (though some will claim giant ancestry and the odd scholar will insist that they are a result of a magical accident). Half-giants are experts at ambush. They surprise on a 1-3 and while attacking from surprise they do double damage.