Today is the feast day of St. Lucian (Loukianos in Greek) of Antioch. He was born Samosata. Orphaned at the age of twelve, he became an ascetic in the city of Edessa. In due time, he was ordained as a presbyter (the official title of a priest) and opened a catechetical school in the city of Antioch. Eventually, he was arrested in Nicomedia during the persecutions of the early 4th century. After nine years in prison, he died of hunger and thirst.

One of the more interesting aspects of St. Lucian's life is his continuing influence on biblical scholarship. He did a critical revision of the text of the Septuagint (a Greek translation of the OT done by the Jews of Alexandria three centuries before Christ) by comparing it to the Hebrew. He also did a critical edition of the Greek NT.

In ancient Christendom, there were two schools of interpretation. The one based in Alexandria used a lot of symbolical interpretation. The one based in Antioch (and the one St. Lucian adhered to) insisted on a more literal sense of the biblical text. Therefore, his critical editions emphasized textual accuracy. His edition contributed significantly to what is called the Syrian Recension of the NT which not only was used by such Greek fathers as St. John Chrysostom, but eventually became the basis for the original German Luther Bible.

This brings up the issue of language. As with any post-apocalyptic campaign setting, I tend to emphasize language in my own campaign to the extent that the languages used by those who built all of these ancient ruins and the monsters who currently occupy them are different than the common language of the player characters.

In LL and B/X, demi-humans begin with the ability to speak several languages. One of the interesting consequences of this in my own game is that the demi-humans have become essential for interpreting the languages of monsters who occupy the ruins. To my mind, this does a nice job of re-enforcing the alien-ness of the demi-humans. It suggests that they are closer to monsters because they can converse with them, as opposed to the human characters which do not begin the game with the same kind of linguistic ability.

Another interesting language quirk in my own game derives from the fact that the majority of my players learned the game via 3.5. Therefore, their assumed understanding of languages is based upon this table from the SRD: 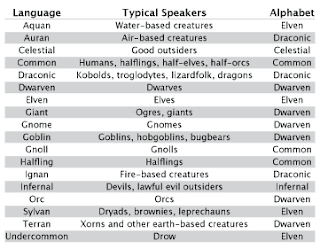 While I did resist this assumption at first, I have since basically accepted it. Though I don't necessarily like some of the specifics, I have come to really appreciate the concept of this table quite a bit. It is diverse enough to be expansive and yet concise enough as to be practical. With some simple edits, this table can be easily adapted for just about any campaign.

I'll end with a couple of questions: