A Paladin in Hell 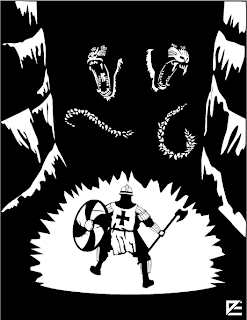 I was inspired by the last few days of discussion and decided to do a little homage to one of my favorite pieces of D&D art, not just in the PH but in the whole history of the game. Of course, you might notice that my version of the paladin is not wearing full plate, but is rather modeled after the Varangian Guard — an elite unit primarily made up of Norseman who served as the personal guard of the Roman Emperor in Constantinople from approximately the 10th-14th century (and who had a chapel in the City dedicated to St. Olaf). This, in part, explains the axe (along with the fact that I just dig fighters who use non-sword weapons).

In addition, according to the cosmology of 1e AD&D, this battle-to-be should be taking place in the Abyss, not in Hell (given that Demogorgon is a demon, not a devil); however, from a Christian perspective, there isn't any distinction between the two. If it matters to you, I suppose you can call this one A Varangian in the Abyss...