Today is the Feast of St. Hilary of Poitiers. Born in the 4th century A.D. of pagan parents in Gaul (modern day France), he was trained in philosophy and rhetoric. In his adult life, he saw the weaknesses of a pagan world-view and embraced Christianity. In A.D. 350 he was elected bishop of Poitier were, along with St. Athanasius the Great (who was his contemporary), defended the Orthodox Faith in a sea of Arianism. In other words, most of Christendom under the leadership of the Arian Emperor Constantius believed that Christ not only did not share the same nature as the Father but that there was a time when the Son was not. In contrast, St. Hilary insisted that the three persons of the Holy Trinity were of one nature.

In A.D. 355, the Emperor required all of the bishops to sign a letter condemning St. Athanasius. St. Hilary refused and was sent into exile in Phrygia, which is in west-central modern-day Turkey. It was there that St. Hilary wrote his seminal work On the Trinity. The Emperor soon found that having St. Hilary in such close proximity to the capital was actually causing more trouble than it was worth and St. Hilary was returned to his see in A.D. 360 where he served until his death in A.D. 368. St. Martin of Tours was his protege and after founding a monastery near Poitiers continued St. Hilary’s legacy when elected to be bishop of Tours in A.D. 370. 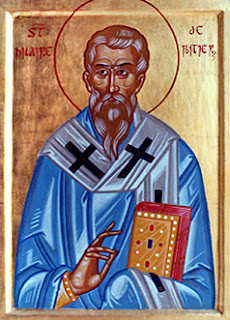 We are also in the season of Epiphany, which for the Orthodox Church is a celebration of the Trinity:


As You were baptized in the Jordan, O Lord, then the worship of the Trinity became manifest, for the voice of the Father bore witness to You, naming You the Beloved Son; and the Spirit, in the form of a dove, confirmed the certainty of the word. O Christ God, who appeared and illumined the world, glory to You. — Apolytikion of the Feast of Epiphany [emphasis mine]

Many years ago now, JB of B/X Blackrazor asked the question Wherefore Art Thou Religion? In response, I declared Religion Art Right Here where I detailed some of the default fantasy analog for Christianity I use in a lot of my campaigns. This post, however, does not explain the Trinitarian nature of the Istinite God. I delve into my thinking on this with this Saintly Saturday post on St. Athansius himself.

This is all a prelude to adding to this tapestry of a fantasy analog of Christianity by taking an early Christian hymn attributed to St. Hilary and passing it through the metaphoric engine I proposed based on the paradigmata of St. Athansius the Great.

First, lets look at the Hymn Gone are the Shades of Night by St. Hilary:


Gone are the shades of night,
The hours of rest are o'er;
New beauties sparkle bright,
And heaven is light once more.
To Thee our prayers shall speed,
O Lord of light Divine;
Come to our utmost need,
And in our darkness shine.
Spirit of love and light,
May we Thine image know,
And in Thy glory bright,
To full perfection grow.
Hear us, O Father blest,
Save us, O Christ the Son;
Thou Comforter the best,
Lead us till life is done.

Note that the metaphoric theme here is Light vs. Dark. The metaphor I use to describe the fantasy analog of the Trinity for my campaign world is borrowed from D&D: Law vs. Chaos or Civilization vs. the Wilderness:

Thus, in order to make this hymn an analog, it is necessary to shift the metaphor and images from Light vs. Dark to Law vs. Chaos.


Gone are the designs of the demonic wilderness
The hours of fear have passed
Remade are the citizens of our metropolis
The people of the New Kingdom are massed
To You our prayers shall speed
O King of the City Divine
Come to our utmost need
In the Chaos it is your rule for which we pine
Citizenship of all that is good and right
May we Your crown know
And in your reign of might
To full perfection grow
Hear us, O Law most blest,
Save us, O Isten the King,
You Righteousness best,
Lead us to life everlasting.

And thus, an analog hymn for my fantasy analog for Christianity based on the work of St. Hilary of Poitiers is born.