Today is the Feast of St. Euthymius the Great who was born in Melitene in Armenia to faithful parents about the year A.D. 377. His parents were older and barren. They received a vision and conceived in their old age. His parents died shortly after he was born and he was taken in by the bishop of Melitene. He was tonsured as a monk and ordained as a priest. In this role, the bishop placed him charge of all the monasteries in the city.

St. Euthymius, however, yearned for the life of a hermit and left for the wilderness. What follows is a typical pattern of great monastic saints: they go out into the wilderness, attract the attention of the faithful through their piety and the miracles performed through them, a community with a monastery at its center forms and the saint goes off to the wilderness and the pattern repeats itself.

One of the monasteries that St. Euthymius founded in this way was in a cave situated on a cliff overlooking a gorge in the desert of Coutila. Despite its terrifying location (one, BTW, that would make a very interesting encounter area for a campaign), it became the location of a monastery and was very popular with the villages in the surrounding area.

He converted a tribe of Arabs. Their leader was ordained and became known as the Bishop of Tents (an interest FRPG title, if I’ve ever heard of one).

There are several great saints that were taught and/or influenced by St. Euthymius including St. Theoctistus (Sept. 3), Symeon the Stylite (Sept. 1) and St. Sabbas the Sanctified (Dec. 5). 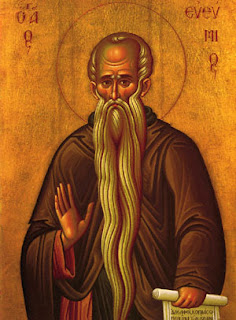 The lives of monastic saints like St. Euthymius are, in many ways, one of the reasons I believe the framework of D&D works so well within a Christian context. The monastic is the adventurer who goes out into the Wilderness (Chaos) to make it safe for Civilization (Law).

The basis for my understanding comes from Scripture. If we look at the geography of Genesis, we have three areas:


In Leviticus, Aaron is commanded to cast lots on two goats. One is sacrificed as a sin offering, the other is presented alive for the atonement of sins and sent away into the wilderness of Azazel. The name Azazel literally means “rugged of God” which emphasizes “wilderness.” According to the Book of Enoch, Azazel is a fallen angel and leader of the Watchers — he is a demon. Thus, the wilderness of Azazel is a demonic wilderness. This is the origin of the word “scapegoat” — the sins of the people are placed upon the goat and sent into the Demonic Wilderness to feed the demons  in place of people. Thus, especially since Cain is exiled there, the Land of Nod is the place where demons live.