Today is the Feast Day of the Ten Martyrs of Crete: Theodulus, Saturninus, Euporus, Gelasius, Eunician, Zoticus, Agathopus, Basilides, Evarestus and Pompey. About the year A.D. 250, during the persecution Decius, these martyrs were brought before the governor from all over the island of Crete: Panormus, Cydonia, Heraklion, and Gortynia. When they refused to renounce Christ, they were tortured in many and sundry ways for thirty days. At this point, the governor was so frustrated he had them all beheaded.

I may have mused on this point before (because it is a point that I make a lot in various milieus), but decapitation was a citizen’s death in the Roman Empire. All of the various nasty things they did to Christians, they did because the crime they were accused of was treason. To refuse to offer sacrifice at the idol of the Emperor was to refuse a citizen’s civic duty.

Thus, when a martyr was beheaded, the official overseeing the trial was admitting that the crime for which the Christian was accused of was false. They were not traitors because they were given a citizen’s death, not the death of a traitor.

Besides the theological victory over death through Christ, many martyrs were also victorious over their persecutors by forcing them to acknowledge the falsehood of the charges against them through beheading. 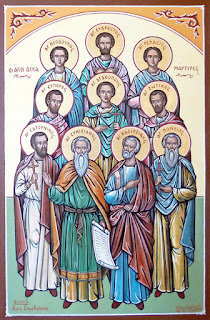 This leads to an interesting line of questions when it comes to world-building in RPGs: what does it mean to be a citizen? Throughout history, citizenship came with certain privileges as well as responsibilities. For example: feudal societies required those nobles underneath a King to provide taxes and military might when called upon. Likewise, citizens of a City State were called upon to defend the city militarily when in need.

I must admit, this is an aspect of world-building that I have often let go by the wayside. Has it ever been a feature in one of your campaigns? If so, how?