Of all the iconic and popular TSR modules, the one I probably dislike the most is I6: Ravenloft. While it reads like a pretty decent dungeon crawl with some nice innovations (like the different goals of the Count and his variable locations through the castle, etc.), I have always found it to be unplayable.

The reason for this is simple: trying to read and make sense of that isometric map gives me a headache. I actually tried to run Ravenloft once in a session and practically abandoned the module in favor of making stuff up on the spot because that was far more enjoyable that trying to figure out where everything was on the map.

Ever since the release of Ravenloft, I have avoided isometric maps like the plague. I would even be tempted to say that I hate them because they render otherwise good material into real or digital toilet paper. I say almost because I will certainly admit that a well done isometric map is a pretty thing to look at. I will also concede that I have wondered if there aren't times when an isometric map could actually do a better job at the table of presenting certain ideas.

As I am gearing up to actually do my own version of ToEE, I got an idea that might very well fall into this category: it is a four story tall room with entrances on all four stories. As an experiment, I ventured to produce an isometric map. I then produced the exact same map in a more traditional way to see which of the two did a better job.

Please note: these two maps are not finished products. I kept the maps relatively simple so that I could easily wrap my head around both versions; however, as rough drafts of an idea I think they both do a very good job of being proofs of concept. 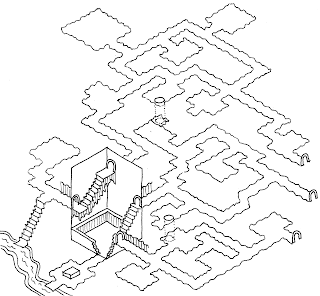 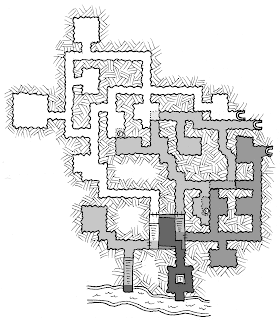 Putting aside which one is "prettier," because I am not really interested in that at this point, which one would you rather have at the table to run a game?