Today is the Feast of the Prophet Haggai who prophesied in the year 520 B.C. during the post-exilic era in Jerusalem. Not a lot is known about him. The book in the Bible that bears his name is only two chapters long. It's message can be simply summed up thusly: Quit lallygagging and get the Temple built!

According to Rabbinic Teaching, Haggai is credited with three teachings:
Apparently, Haggai was on good terms with the political leaders of his time, Zarubbabel the Governor under the Persian King Darius I as well as Joshua the High Priest. There is some evidence that he saw in the weakness of Darius and Persia an opportunity to re-establish a Davidic monarchy: 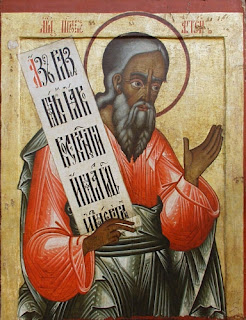 From a RPG perspective, there are a lot of things that can be mined out of this.

First and foremost is a traditional Keep on the Borderland kind of set-up with a religious and political undertone not normally found in such set-ups. Normally, the “Bright Empire” collapsed a long time ago and the remnants are either trying to hold on to or are trying to restore what was once Civilized Lands overtaken by the Wilderness. In this particular case, the Keep is manned by a conquered people of a different faith than the Empire. In addition, that Empire is in process of collapsing (with the peoples of Tadmor and Kardu in process of abandoning ship). Thus, ambitious PCs could take advantage of the situation and cause all kinds of mischief.

Second is the idea of the Signet Ring. Admittedly, Haggai uses this image as a simile, but making such an item a relic would be like fuel to the fire in a set-up like that above. Imagine all of the various factions that want to get a hold of the Signet Ring in order to impose their political will on the growing chaos of a collapsing Empire…

Finally, we come to what is probably the most fiddly thing that can be mined from the Book of Haggai: a Lunar Calendar. One of the reasons that we can confidently place Haggai in Jerusalem in 520 B.C. is because he prefaces his three prophetic statements with dates. While the Jews used a lunisolar calendar (which combined cycles of both the sun and the moon) for the purposes of an RPG world, in would be easier to simply use a Lunar Calendar. This shouldn’t be too hard, given the fact that a typical lunar month on earth is approximately 30 days. Basing an FRPG world on a Lunar Calendar shouldn’t be much of a stretch. The fiddly bits come with what one can do with the waxing and waning of the moon.

I mention this because I was going through some dusty back-up discs and found a digital copy of Avalon Hill’s Dragon Pass which uses the phases of the moon to affect the forces of Tarsh (aka the Lunar Empire). The Book of Haggai suggests that one of the major differences between the two religions is the use of a Lunar Calendar because of a dependence upon the lunar cycle for effective magic use. The collapse of the Empire might actually be predicated on a change in the lunar cycle (which could be a long term mystery to be solved by the players).

As I have said multiple times before: the Bible (especially the OT) proves over and over again to be as much as a font of inspiration for FRPGs as anything in Appendix N.