Back in December of 2011, I did a review of a module penned by Matt Finch called Demonspore. In it I stated that is the best module produced by the OSR. In the most critical way, I still maintain this position: Demonspore remains one of the very few modules written in the last ten years I have actually used at the table and would do again in a heartbeat.

The reason is quite simple. Whereas there have been some amazing ideas out there that form the foundation of some great material (many of which blow Demonspore out of the water), very few adventures go out of their way to be as flexible as Finch’s Demonspore. In Matt’s own words:


The module is extremely flexible in terms of how to fit it into an ongoing campaign; there are four possible approaches to the Halls of the Toad-King, two of which are underground passages that can be linked to one of your own dungeons or might simply lead to the surface. There are also two river entrances, one of which is guarded, allowing a frontal assault or a negotiation type of adventure, and the other of which is more difficult to enter, but is not guarded. This second river entrance might be used if the adventure is to be more of an infiltration.

In other words, I could drop this module into my existing megadungeon without a hitch and had several sessions of great adventuring that ultimately led to the story behind why stirge meat is a delicacy in Headwaters in my Lost Colonies campaign. 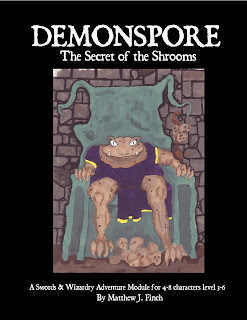 At the time, I challenged other adventure designers to follow suit. Indeed, I hoped enough folks would produce similarly designed material that could be pieced together seamlessly as an ever growing community designed megadungeon that could be dropped into any campaign. Alas, Demonspore remains one of the more obscure adventures in Matt Finch’s library and no one (to my knowledge) heeded my call.

In thinking about how to do my own version of ToEE, it occurred to me that I had an opportunity to head my own advice. I will release the various pieces and parts of my version of ToEE as individual adventure modules under the moniker of Adventure Tools. Like Demonspore before them, they can be dropped into any campaign, stand on their own, be an add-on to a extant dungeon or collected together and run as the semi-megadungeon that I am in process of putting together. At some point, I’ll do an omnibus edition where all of them are stitched together as the module I originally had in mind, but I really want to highlight this idea of flexibility and usability in an adventure module.

Hopefully, someone besides me will see the value in this simple design concept.