Today is the Feast of Sts. Cosmas and Damian the Unmercenary Healers. These brothers were from a pious family in Rome and were physicians by trade. They became renowned for miraculously healing people through prayer. The brothers told the sick, “It is not by our own power that we treat you, but by the power of Christ, the true God. Believe in Him and be healed.” They accepted no payment for their treatments and so earned the title “Unmercenary Healers.” They were martyred the year A.D. 284, under the Emperors Carinus and Numerian. 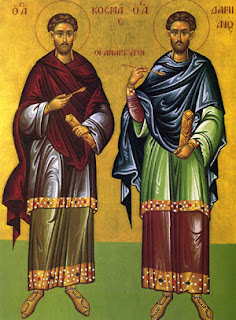 It is also reminiscent of the superhero trope of the mantle most explicitly expressed (in my mind) by the Phantom: the Ghost Who Walks. The whole mystique of the Phantom is that he never dies and this illusion is accomplished by the mantle being passed down from generation to generation. 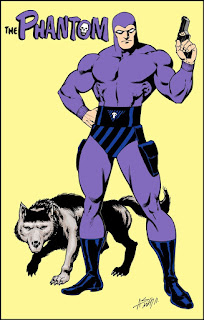 Sts. Cosmas and Damian, however, suggest a different kind of mantle. Whereas superheroes like the Phantom defend a place and/or fight injustice as vigilantes, Cosmas and Damian largely ignored the powers that be and simply healed those in need. Of course, this resulted in many believing in Christ which was perceived as a threat to Roman rule.

In context of an FRPG, this suggests an interesting twist on the whole “my character got bit by a giant rat and needs a Cure Disease spell” experience. What if practicing divine magic were illegal or tightly controlled by the the powers that be or was otherwise restricted to the rich and powerful? In response there could be a mantle for various healers to pick up in order to protect their own identity and still be able to help those in need. Such a mantle could even eventually be picked up by a cleric PC.

For an example of a campaign style where such a mantle could exist, check out this.