Today is the feast of St. Callinicus the Martyr of Gangra in Asia Minor. He was born to a Christian family in Cilicia (southern part of modern-day Turkey). In the early part of the 4th century, he became a wandering preacher, bringing many to Christ. Upon coming into the Galatian city of Ancyra (central part of modern-day Turkey) he was arrested by Governor Sacerdonus, a fierce prosecutor of Christians.

After resolutely refusing to denounce Christ and offer sacrifice to the idols despite being beaten with ox thongs and having his flesh torn with iron hooks, shoes with nails directed inwards were placed on his feet and he was paraded through the streets to the city of Ganga. The soldiers who were escorting him ran short of water, and asked that the saint pray to his God for relief. A spring welled up out of the ground to quench their thirst. Once in Gangra, the saint was burned at the stake. Despite being given the crown of martyrdom, his body remained incorrupt. 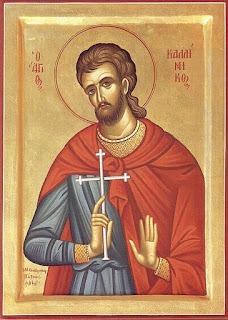 The Shoes of St. Arz


These magical shoes appear to be torture devices made of metal with spikes affixed to the soles of the shoes designed to penetrate the foot of the wearer; however, they give off a magical aura if detected for. Should anyone be brave enough to put these shoes on, they suffer 1d6 hp of damage, cannot remove to shoes until death (even with a Remove Curse spell) and can only surprise on a roll of ‘1’ instead of 1-2 on a d6. The wearer of these shoes cannot die of thirst, is immune to all normal fire, takes half damage from magical fire and may make a saving throw to reduce any damage from magical fire to 0.