Today is one of the Feasts of St. Athanasius the Great, who is also celebrated on January 18 with St. Cyril of Alexandria.

Let me get this out of the way: I love this man. As one might expect from someone who has written blog posts entitled Saintly Saturdays I have relationships with many of the saints, and many of them are special, formative and important to who I am; however, if there is one saint who has had more influence on who I am, how I think about God and how I read Scripture, the one that comes to mind is St. Athanasius.

One of the central players in the Christological controversies of the 4th century, Athanasius was only a deacon when he attended the First Ecumenical Council as an aid to the Patriarch of Alexandria. This did not stop him from influencing and convincing that Council to adopt what would become known as the Nicean Creed (which is an inaccurate translation historically, conceptually and linguistically — it should be known as the Nicean-Constantinopolitan Symbol of Faith).

He would go on to not only become the Patriarch of Alexandria but THE defender of the First Ecumenical Council. At times, he stood alone against the world, spending seventeen of his fifty-seven years as bishop in various exiles. Several times he escaped the clutches of imperial soldiers intent on placing him jail or even executing him. One of my favorite of these escapades sounds much like a story told of an RPG party getting out of a tight spot.

During the reign of Julian the Apostate, soldiers seeking his execution were in pursuit of him as he fled down the Nile on a boat. When Athanasius realized he was being chased, he had the boat turn around and calmly head down the river towards his pursuers. When they caught up with him, none realized who he was and when questioned as to the whereabouts of Athanasius, he responded, “He is near.” This caused the soldiers to rush away past the bishop in hot pursuit of what was nothing.

At the center of the controversy was (is) two seemingly contradictory experiences of God. One is best summarized by St. John Chrysostom in his Anaphora:


You are God ineffable, beyond comprehension, invisible, beyond understanding, existing forever and always the same

The other is described by St. Peter in his Second Catholic Epistle:


He has granted to us his precious and very great promises, that through these you may escape from the corruption that is in the world because of passion, and become partakers of the divine nature (1:4).

All of the various heresies throughout the history of the church have tried to explain this apparent contradiction away by minimizing or ignoring one of these experiences. The Orthodox Church has always insisted on both.

St. Athanasius was one the first in a long line of Church Fathers to wrestle with how the Church has always experienced God as both intangible, etc. and tangible, etc. He did so by differentiating between the being of God (which is ineffable, beyond comprehension, invisible, beyond understanding, existing forever and always the same) and the activities of God (in which we can partake of His divine nature).

To this end, he scoured Scripture to find what he called παραδείγματα (paradeigmata) which is the root word for the English word paradigm. He found that whenever there was a simile or metaphor that referred to God, it would do so in a consistent manner for the Father, the Son and the Holy Spirit.

For example, the Father is fountain (Jer. 2:13), the Son a river (Ps 65:10) and we are said to drink of the Holy Spirit (1 Cor 1:13). His point is that the Trinity is one in being, but distinct in the activities of the three persons. The Father cannot be a fountain if there is no running water (the Son) or if we cannot drink of it (the Holy Spirit). Remove any one of the Trinity from this paradigm and you are no longer referring to the same God that is found in Scripture. 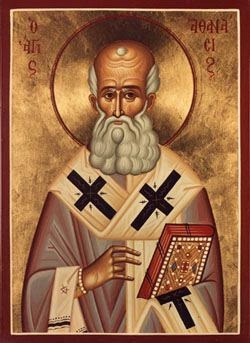 I find this use of paradigms to be extremely useful in terms of inserting a Christian/Church-analogue into an FRPG setting. One can cast the Trinity in terms of paradigm:

So, to use the example above, a fountain is the source (Father); the river the embodiment of a fountain (Son); and we participate in the fountain by drinking of it (Holy Spirit).

Thus, it is possible to insert a Trinitarian understanding of God in a simple way that is not only interesting, but also feels just alien and familiar enough to fit in even the most Sword & Sorcery-influenced settings. For example, I use these Trinitarian paradigms with the Christianity analogue in my Lost Colonies Campaign.

The source (Father) of the metaphor is Law. The embodiment (Son) of Law is Crown or King. The means by which humanity participates (Holy Spirit) is Citizenship or Righteousness. Thus, the three persons of the Istenite Trinity are as follows:


In the Istenite’s understanding of their trinitarian god, the second person of that god, Isten (the embodied Crown or King), became incarnate in order to serve and protect his people rather than seek power. In this way Isten is an ideal king and therefore embodies the first person of god, Nomos (Law). Istenites participate in Isten through the third person of god, Thikeosyni (Citizenship or Righteousness). In doing so, Istenites become embodiments of Nomos as well.

All one has to do is choose what concept or title of God you want to emphasize in your campaign and then plug in the source, embodiment and means of participation and you have a taylor-made trinitarian analogue that adheres very closely to the way St. Athanasius argued for the Orthodox understanding of God.