If there is one main feature that sets FASERIP apart from Marvel Superheroes and other renditions of the system is its use of a Campaign Rank. This is a rather simple concept which standardizes the power range of all of the characters in the game. For example, a standard comic book-style campaign would have a Campaign Rank of World Class (Wc30). Thus, all of the character’s ability scores and powers would be based off of a rank of Wc 30. While some abilities and powers might be significantly lower or higher than the Campaign Rank, every PC in the campaign is going to be around the same in terms of power.

I love this, not only from the perspective of ensuring that every player is going to have the mechanical ability to contribute to the game, but it also allows the mechanics to be tailored to a specific campaign concept. For example, in my K-inspired FASERIP campaign, I want the power levels to be on the low side, where an average PC will have powers around the rank of Average (Av 6) to Decent (Dc 10). It also allows me to have what might otherwise be considered a rather low-level or average powered NPC actually be quite powerful given the Campaign Rank. All in all, it is a rather elegant addition to the system.

To that end, here is an example of one of the most powerful NPCs my players might encounter during a typical session of this K-inspired campaign (which really needs a better name): 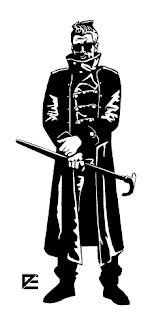 Allen Green is a vassal of the Green Monarch. He is the leader of a specialized police force that is charged with keeping the peace between the vassals of the Five Monarchs. He is more commonly known as the Whistler because all of the powers he exhibits are based on the control of sounds and vibrations. Besides using the vibrations that result from striking the ground with a cane, the most common way he manifests his powers is by whistling. The is particularly true when he uses his Emotion Control powers to help calm volatile situations or when he is using his superspeed (which manifests itself as an ability to “draft” behind sound waves).

For those interested, this NPC was created using the Character Creation rules in FASERIP.