Today is the Feast of the Prophet Isaiah. The book attributed to him is one of the longest in Scripture at 66 chapters and over 25,000 words. Given how much life is demanding my time these days, I am not going to spend a lot of that time on that text. Rather, I will focus on the historical context and share some of the extra-biblical stories attributed to Isaiah.

The prophet was of royal lineage. He was the nephew King Amaziah of Judah (796-767 B.C.). His name means “The salvation of God.” He married a prophetess and had a son named Jashub. He prophesied during the reigns of Uzziah, Joatham, Ahaz, Hezekiah and Manasseh. This places him in a very turbulent time.

After the reign of King Solomon, the kingdom was torn in two. Sometimes the two are referred to as the Northern Kingdom and Southern Kingdom. They are also called Israel and Judah. During Isaiah’s lifetime, the Assyrians were busy conquering kingdoms all over the area, including the Northern Kingdom. Isaiah criticized both kings and the people for turning away from God and declared that the various military defeats suffered by Judah were a consequence of this disobedience.

Isaiah influenced Hezekiah to turn back to God and re-instate the liturgical practices specified in the Law. When Assyria came before the gates of Jerusalem, they were turned back through the prayers of Hezekiah and Isaiah.

Isaiah was killed by King Manasseh. Though not specifically named, his execution is mentioned in Hebrews 11:37 where a prophet is said to have been sawn in two. According to tradition this was Isaiah and it was a wooden saw. 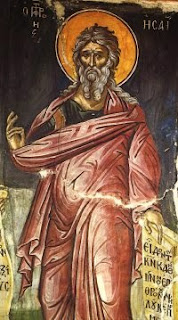 Another interesting attribution to Isaiah is the Pool of Siloam. During a siege, Jerusalem’s water supply was becoming exhausted. Isaiah prayed and water started to flow from beneath Mount Sion. It is the same pool in which Christ has the blind man wash his eyes in order to restore his sight (John 9).

The Pool of Siloam had an interesting liturgical role during the Festival of Tents during the Temple era. There would be a procession from the Temple to the pool where water was drawn using a golden pitcher. This water was then processed back to the Temple with the sound of the shophar (trumpet) and around the altar while the Hallel (Psalms 113-118) were chanted. The men would wave fruits, palms, myrtle and willow to various verses in the Psalms. The water would then be offered along with the drink offering made at the altar.

In context of FRPGs, this is an excellent example of the kinds of little details that make exploring a dungeon really interesting. As I have noted before,  I like to have three basic eras that a dungeon exists through: Ancient, Old and Present.

In this case, we can understand the Ancient source of the Pool to be Isaiah’s prayer during the siege. The Old era would be the temple worship and the Present as the ruins of Jerusalem after its destruction in A.D. 70.

These kinds of detail really give a dungeon a sense of place and history. Personally, discovering these details while my PCs explore dungeons or revealing them to players as they explore are some of my favorite moments while playing RPGs.