After much discussion (two positive votes and a sentiment that it is far more descriptive), Five Monarchs Campaign it is.

If I have one major complaint of RPGs as a whole, it has to be the Character Sheet. Off the top of my head, I really only like two that were supplied by the game itself: the 1e AD&D goldenrod sheets and 1e Champions. Even I wonder if both of these have more to do with nostalgia than functionality or appearance (although the 1e Champions CS was really functional).

It seems that the best Character Sheets are almost always a blank sheet of paper that is slowly built into a character sheet, or those created by folks who have played the game and know how to organize the information necessary for handy use.

This doesn't stop me from wanting or wishing for truly inspired Character Sheets. Even when that blank sheet of paper evolves into a record of a really interesting character and campaign, there is part of me that always wants a character to graduate to an "official" Character Sheet worthy of the character it records.

I mention this because FASERIP is particularly egregious in the category of ugly Character Sheet design and because I plan on playing this campaign with my kids. Part of the attraction and nostalgia I have for those goldenrod and 1e Champions Character Sheets is that they are part of my education on how to play those games and RPGs in general.

Therefore, I am keen on having a cool and informative Character Sheet to give to my kids when we play. I am hoping this fits the bill: 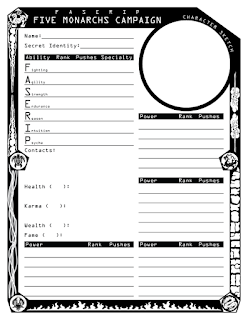