I would not call myself an anime fan. Giant robots and demons bore me and these seem to be the focus of much of the genre. There are, however, a fair number of exceptions that I do enjoy, so I occasionally poke around to see if anything piques my interest. The most recent of these finds was the series K. 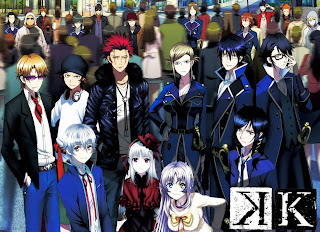 I mention this, because it has got me itching to poach a bunch of ideas from the series in order to make a rather non-traditional superhero campaign using FASERIP. Therefore, a little background about the world of K:

Back in WWII there was a German scientist working in conjunction with the Japanese to create a super soldier. There is a McGuffin that endows an individual with superpowers that they are then able to impart in limited form to people who choose to be their vassals. In the end, the McGuffin creates seven “kings.” These kings are categorized by color, of which six are referenced in the show:

The people endowed with powers by their kings are called Clans, differentiated by color — Red Clan, Blue Clan, etc. Conflict does occur between the clans, although the kings all seem to be on relatively good terms even if their own personal goals seem to differ. The powers of each clan manifest in the color of their clan and seem to have similar special effects, even if each individual might be more effective than another at pulling interesting maneuvers with the power. For example, the Red Clan uses fire and the Blue Clan uses katana as a focus for their powers.

All of this takes place in an alternate, high-tech version of Tokyo. The average citizen seems to be rather oblivious to the existence of the Seven Kings and the Clans. Indeed, only members of the clans refer to each other as clans. Outside of their small world, they are referred to by a public name. The Red Clan is called Homra and the Blue Clan is called Scepter 4.

The general public are under the impression that the Prime Minister is the most powerful person in Japan, when in reality he is answerable to the Kings. When conflict between the clans results in widespread damage, it is generally reported as gang activity or even terrorism. There is also a precedent for “normals” forgetting specifics about clan members.

Interestingly, members of the various clans seem to be friends, despite being rivals. There are several of these relationships that are highlighted throughout the series.

In addition, there are beings called Strains, which are able to tap into the McGuffin without directly becoming a vassal to one of the kings, although these seem to be rare and strictly controlled by the clans.

This all suggests a really interesting superhero world that lends itself to a lot of adventure possibilities. The source of all superpowers are the Monarchs, of which their are five: Red, Yellow, Green, Blue and Violet. All of the Monarchs and their vassals operate within a modern setting, but slightly out phase, where the average citizen will perceive all their activities from a perspective that explains away all that they see as “rational.”

Each Monarch has the best interest of the normal population in mind, but how that best interest is defined can differ greatly from Monarch to Monarch. Red and Violet are two ends of a spectrum and those two clans are not only arch-rivals, but largely operate outside of what might be considered civilized. The Green Monarch represents the status quo and the Green Clan largely plays the role of peacekeepers.

The X-factor in the campaign would be the existence of Strains — beings that have powers, but are not vassals to the Monarchs. This could be the main source of a lot of adventures, where Strain(s) show up and each Monarch wants to take advantage in order to fulfill their end-goal. Thus, clans could ally with each other depending upon the threat/use of the Strain and how it manifests.

Thus, characters would be low ranking clan members who are sent on missions to further the goals of their Monarchs. In a very basic version of the campaign, all PCs would be from the same clan; however, if I ever had the time and the right group I could see PCs being friends from different clans who try to balance their allegiances throughout the campaign.

The thing I love about FASERIP, is that its character creation system would easily support this campaign concept. All the characters would be of similar level and players would have a basis for how to describe the special effects of the powers they roll up for their characters.