Cezavy refers to a common language spoken by various tribes in the northeast of the OKW. The are a barbarian peoples who have only recently stepped on the road to civilization. As such, the word “Empire” is more symbolic than actual, though there is a foundation in place on which to build.

Historically, the Cezavy peoples lived in various Principalities (also called Duchies) controlled by city-states. Each city-state had its own method of choosing a prince (traditionally called a Graf). As such, there really isn’t a well-developed aristocracy. There is an acknowledged difference between land-owners (boyars) and those who don’t own land (peasants and, in some cases, serfs), but this line has always been fairly easy to cross.

The seeds for empire were first planted when missionaries arrived in Cezavy lands from the Thyatic Empire. The first to convert were the Grafs of Sclavak and others soon followed. Thyatic bishops started establishing churches and the Cezavy people had something larger than their own city-states to aspire to. They were now part of the Thyatic sphere of influence.

When Chaos overran the Thyatic Empire, the Grafs of the Cezavy saw themselves as the last bastion of Civilization. A Tsar (meaning “emperor”) was chosen, and a shaky political alliance has formed. Whether or not this new political reality can withstand either the forces of Chaos or internal strife, only time will tell.

Here is a regional map, showing the six Principalities that make up the Cezavy Empire: 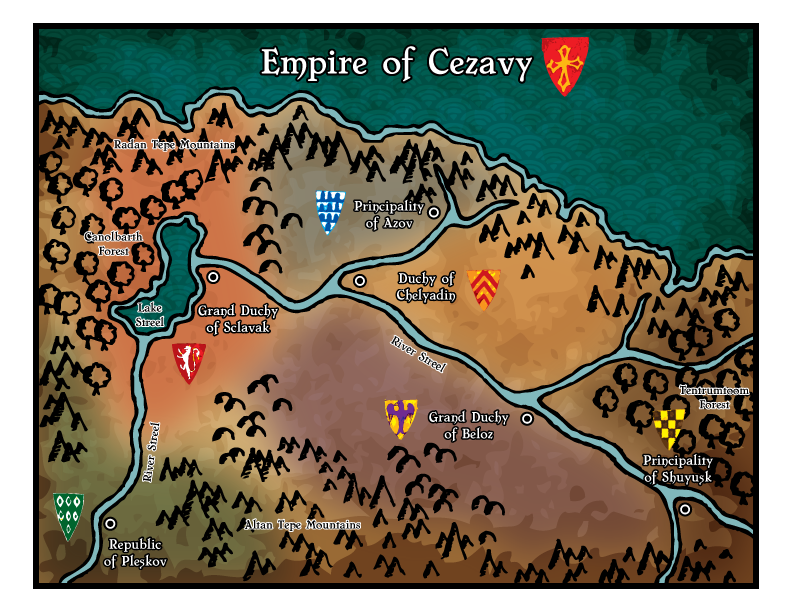 The area shown in the map is approximately 425 miles by 300 miles. Spheres of influence are indicated by color:

Along with Beloz, Sclavak is the oldest of all the Cezavy states (thus the title “Grand” Duchy). Though it is not the richest nor does it have the largest military force of all the Cezavy states, Sclavak has traditionally had the most political influence. This is, in part, due to the fact that Sclavak is home to the Archbishop; however, even before the coming of Thyatic missionaries, the Grafs of Sclavak had invested heavily in a very well developed spy network. Colloquially, the Graf of Sclavak is known as the Old Fox or the Silver Fox. In part, this is due to the heraldry of Sclavak, but also due to the way they have always managed to get the upper hand through information brokering and manipulation. As a result, when the Empire was formed, the Graf of Sclavak was selected as Tsar.

Beloz is a long-time rival of Sclavak. They have the largest military of all the Cezavy states and boast of a long and proud military tradition. This might have been enough for the Grafs of Beloz to lay waste to their rivals had not much of their military effort been focused on defending their long southern border from the Vanog Orcs of the Altan Tepe Mountains. They are most closely allied with Shuyusk. Colloquially, the Graf of Beloz is known as the Eagle, and sometimes the Black Eagle if they should take a despotic turn.

Pleskov is singular among the Cezavy states because the Graf of Plaskov is indirectly elected by the gatherings of the people in what are called Veches. These institutionalized assemblies directly elect an advisory council of six members who then go on to elect a Graf. Electoral ties are traditionally broken by the bishop of Pleskov. As a result, the burgher class in Pleskov has a tremendous amount of influence and has made Pleskov the most wealthy Cezavy state by making it merchant-friendly. There is a bit of a rivalry between the Archbishop of Sclavak and the bishop of Pleskov. Due to its relative political power, its wealth and its traditional proximity to the Thyatic Empire, there are many who have argued that the see of Pleskov should be the seat of the archbishop and not Sclavak.

Shuyusk may not be the oldest Principality in the Cezavy Empire, but it is one of the most traditional. It was the last to see Thyatic missionaries, and it still chooses its Graf in the ancient Cezavy method: by trial of combat. This is not, however, simply a test of martial skill. Of equal importance is how one fights. A council of tribal elders decides whether or not any of the combatants are worthy to be Graf (there have been times when the answer was no). This emphasis of martial prowess is due to threats on two fronts: Vanog Orcs to the south and the Hagoth Clans to the east. There are rumors that the current Graf has formed an alliance with a group of werebears and may very well be one himself.

These two Principalities are the youngest of all the Cezavy states, having been formed at the birth of the Empire. The Graf of what was then the Great Principality of Azyadin was steadfastly against the formation of the Empire and several other Grafs were happy to allow him to be an impediment to the new Cezavy State. The Silver Fox prodded the recalcitrant Graf onto the battlefield where he was betrayed by his uncle and his illegitimate son. Azyadin was split between the two. Azov is now in the hands of the son and the uncle is now Graf of Chelyadin. They supported the SIlver Fox’s bid to become Tsar and the Empire was born. As a result, the two states are seen by many to be puppet states of Sclavak. Certainly, they are the most despotic of the Cezavy states, as neither Graf trusts their people nor do they have the confidence of their people.