Saintly Saturday: The Consecration of Constantinople

Today the Orthodox Church commemorates the consecration of the city of Constantinople, which gives me a chance to do things a little differently this Saturday. Normally, I would go through the story of a saint’s life and pull something interesting or inspiring to apply to RPGs. This (hopefully) demonstrates how useful it is to plum the history of Christianity and how truly rich that history is.

Today, I am going start with an RPG concept and see how the story of Constantinople fits that concept. When designing an RPG environment, especially those that PCs are going to explore — the dungeon, the wilderness or a urban area — it is useful to have multiple layers of history to that area. These multiple layers give the DM/GM/Ref/Judge/LL/etc. a rich tapestry from which to improvise information about a specific area.

If I know that a particular area now occupied by orcs was once used as a temple by elves and before that was a nursery for metallic dragons, I can give a variety of interesting details that clue the PCs into the history of what this place once was:


Knowing these two larger details (the elven temple and dragon nursery) lead to a far more interesting and cohesive set of smaller details, which can then spin off into adventure hooks or interesting NPCs interactions (say an elf or a dragon looking for evidence that these places still exist). 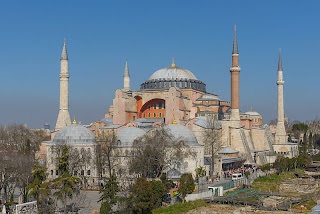 
Thus, in a Mutant Future campaign where modern Istanbul lays in ruins and is crawling with irradiated monsters, there is a rich tapestry of historical clues one can give PCs along with a great hook for adventures: the remnant Christian church is hoping to find relics from when the city was still occupied by humans.