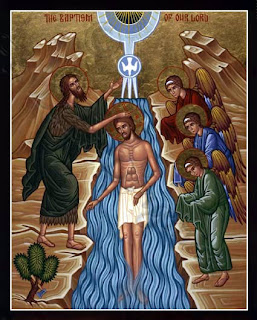 Why do you hold back the waters, O Jordan? Why do you hinder your streams, and why proceed not on your natural course? I cannot bear, said he, the consuming Fire. I stand in awe and shudder before His extreme condescension. For I am not wont to wash Him that is clean: I have not learned to bathe Him that is without sin, but to purge defiled vessels. Christ, Who is baptized in me, teaches me to burn up the thorns of sin. John bears witness with me: the Voice of the Word does cry: Behold the Lamb of God, which takes away the sin of the world. Unto Him let us, the faithful, cry out: O God, Who has appeared for our salvation, glory be to You. — Doxasticon of the Sixth Royal Hour of Theophany


One of the reasons I haven’t been posting much at all in the last week is that Theophany (aka Epiphany — when Christ is baptized by John in the River Jordan) is today — on a Sunday. In the Orthodox tradition, this means a major shake-up in the order of services.

Even in a normal year, Theophany is a big deal. Historically it has always been more important than Christmas, which merely sets the stage for Theophany. The main reason is that this is a feast which explicitly discusses the nature of God as a Trinity:

As You were baptized in the Jordan, O Lord, then the worship of the Trinity became manifest, for the voice of the Father bore witness to You, naming You the Beloved Son; and the Spirit, in the form of a dove, confirmed the certainty of the word. O Christ God, who appeared and illumined the world, glory to You. — Apolytikion of Theophany


While Christmas nicely emphasizes the Incarnation, it does not explicitly include the other two persons of the Trinity.

Not only do I wan to wish the blessings of the sanctified water upon all who bother to read my blog, but I also wanted to highlight the idea of time in terms of an RPG.

One of the things that makes a really good adventure is placing pressure on the party through time. Most often this takes place in terms of resource management — how long will our torches last? how long can our cleric keep us healthy enough to survive another encounter? One can also use time as a limit before something bad happens, like (to use the Rescue the Princess trope) the dragon eating the princess at dawn.

Today’s celebration of Theophany also calls attention to yet another use of time. This week has been nothing but preparation for me because of having to prepare for all the changes that happen because Theophany falls on a Sunday. In other words, time can dictate major changes in a dungeon or an adventure location depending upon when one goes there.

For example, there might be a door that can only be seen and opened during a full moon (as in the Lord of the Rings) or an entire section of dungeon (which might hold the key to an important treasure hold) is only present at certain times of the day, week, month or year.