Saintly Saturday: Icon of the Theotokos the Milk-giver

I have to admit that I was struggling this week with what to write about for this post. I always look ahead at the saints celebrated on the coming Saturday and normally one just jumps out and inspires with all kinds of ideas. Not so much this week. And then the Theotokos (the Virgin Mary) decided for me.

Last night arrived an icon my wife ordered from Romania and today is its feast day. Thus, My Lady the Theotokos the Milk-giver has requested that I write about her. 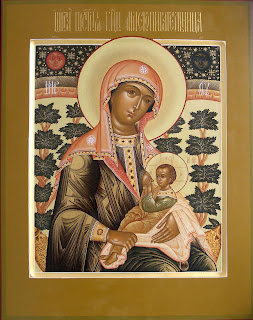 This is a rare icon showing the Virgin Mary breastfeeding the Christ child. It is a pictorial theological statement that started in the sixth century A.D. in reaction to the various heresies that are scandalized in part or in whole with the Incarnation. There have been various attempts to explain away (and therefore deny) the idea that God Himself in the second person of the Trinity would humble Himself by becoming a helpless babe dependent upon His mother for milk. This icon definitively defends this understanding of Christ.

This idea also shows up in the hymnody surrounding the Theotokos. In the Greek tradition, as part of the Dormition Fast (the preparatory period prior to the Falling Asleep (death) of the Virgin Mary in August), the Paraklesis (supplication) to the Theotokos is sung. The last hymn in this commemoration of her death is this:


You are a tower adorned with gold,
A city surrounded by twelve walls,
A shining throne touched by the sun,
A royal seat for the King,
O unexplainable wonder,
How do you nurse the Master?

Note how it is asked in the present tense…

Today the icon is in the Serbian monastery Hilandar on Mt. Athos.

In a sandbox type of campaign, one of the most useful tools of a DM/GM/Referee etc. is the Patron. They are an excellent source of rumors, adventure seeds and sponsors for expeditions that players might not otherwise be able to afford or have the means to undertake.

This feast in honor of the Icon of the Theotokos the Milk-giver demonstrates that, with a little thinking outside the box, that a Patron need not necessarily be a regular NPC. Saints can be Patrons, as can relics, artifacts and magic items.

For example, imagine a party coming into town needing the healing services of the clerics of a particular church or monastery (or training or any number of things a party would routinely show up at such a place). There could be a visiting dignitary trying to move an icon or some relics to another place or their could be some kind of artifact that resides there.

When the PCs arrive with their request, a staff falls at their feet, the artifact reacts in a particular way or the relics themselves have been refusing to be moved until the PCs show up. In this way, these objects are communicating that they wish the PCs to undertake some task — such as moving them from Point A to Point B.

These tasks can always be refused, of course, but then the DM/GM/Referee etc. has an excuse to have this object NPC mess with their lives in small ways until such time that the task is complete.

On the surface, this may seem to be a tool in the rail-road-type campaign toolbox, and it certainly could be used in such a manner; however, if one roleplays the situation and its aftermath instead of imposing mechanical consequences this can add a whole new layer of depth to a campaign world where PCs can have relationships with unconventional things like magic items, relics and artifacts.