One of the reasons that I haven’t been posting this week is that I have been furiously drawing maps (I had an aha! moment about The Chateau des Faussesflammes, which is one of those projects I have left fallow for too long). A curious byproduct of this creative avalanche was that all my kids wanted to get into the action, particularly my eldest daughter. She took one of my pieces of graph paper, carefully tried her hand at a dungeon level and proudly produced this: 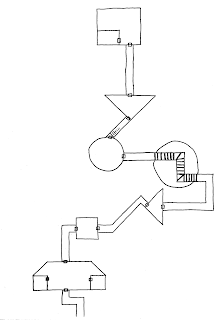 Though nicely drawn and quite creative (I particularly like the crooked bridge across the big hole) it is very linear and I said so. I then had to explain how there was no real choice about where to go. She went back to the drawing board and produced this: 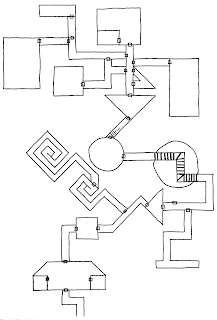 While there are certainly more choices than her first attempt (and even a false door!), this is still a rather linear dungeon level. Once entered, there is really only one direction to go and most of the choices made by adventurers are false ones — they lead to a bunch of dead ends and they are therefore still forced in one direction.

It was at this point that my daughter made her cute face and asked if I could pretty please use her map and make it all pretty in the computer — something that I could not say no to; however, I insisted that we make a few minor changes into order to make the dungeon level less linear and the choices made by adventurers meaningful.

Here is the result: 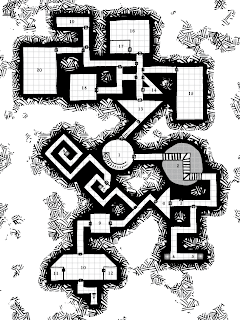 Besides the obvious graphic enhancements, we also made the following changes:


The result is a small dungeon level that I would be excited to add to one of my dungeons — it has the potential to offer all kinds of adventuring goodness because it allows player choice and each choice has real meaning.