Today is the feast of St. Simeon the Elder. From childhood he took up the vocation of a hermit, living in a cave in the Syrian wilderness. Having heard of his holiness, people began to flock to him. Therefore, he withdrew even further into the wilderness by going up into the mountains of the Aman range. Still, people travelled from far and wide to see him. Finally, he withdrew to Mt. Sinai.

After struggling at the place where Moses received the name of God, St. Simeon was directed to returned to Aman, where he founded two monasteries. He died around the year A.D. 390

I am tempted to once again point out the way the hermit’s life is an allegory for the wilderness adventures and end-game of D&D. The pattern of St. Simeon’s life is repeated over and over again throughout the history of Christianity. The hermit goes into the desert (where demons reside according to Scriptural geography) in the same way that mid-level adventurers begin to wander the Chaotic Wilderness. People would brave the desert and the wilderness in order to gain wisdom from these hermits in the same way that adventurers begin to make the Wilderness safe for travelers. The hermit, feeling that they are not yet ready or worthy of such attention, goes deeper into the desert, in the same way adventurers seek greater and greater challenges.

This pattern repeats until the hermits are ready, at which time they come out of the wilderness and come back (in the case of Simeon to a place he was famous at before) to build a monastery or serve in some capacity within Civilization. Similarly, the end-game of D&D has the adventurer build a stronghold within the Wilderness that they have made safe for Civilization.

Intriguingly, the monasticism that St. Simeon took part in on Mt. Sinai is recorded by the pilgrim Egeria sometime in the A.D. 380’s and is the earliest evidence of monasticism on the mountain. Eventually, the Monastery of St. Catherine was built in the sixth century and produced some of the greatest pieces of Christian art ever, including one of my favorite icons of Christ: 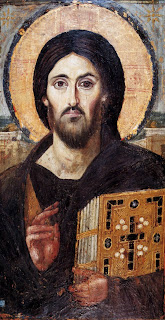 This brings me to what I’d rather write about today, especially in light of what happened in the hobby this past week. We live in a society obsessed with what is new. We line up around the block for the latest movie, video game, phone, computer or whatever because it is new. We live under the illusion that progress is not only good, but inevitable. Any serious study of history demonstrates that wisdom and knowledge are always being lost because civilizations rise and fall because we are repeating the same mistakes again and again.

In other words, new does not always mean better and we must always ask ourselves what we are progressing towards. The monastery at Mt. Sinai, and others like it, are beacons that illumine the world about the old and ancient that are not only worth preserving, but emulating. Last week, WotC gave all of us who participate in this hobby a very pleasant surprise by releasing part of the old ways of D&D for consumption again. Personally, I was extremely gratified to see that, at least in this small part of the world at large, the folks in this hobby have learned this glorious lesson — we not only want to preserve our past we want to use it.