Today is the feast of St. Thomas the Apostle. Of the Twelve, St. Thomas may very well be my personal favorite. While he is most popularly known by the moniker “Doubting Thomas,” I believe this is a bit unfair. While he does declare that he would not believe in the resurrection before he put his hand in the mark of nails and in the Lord’s side, note his words upon seeing the resurrected Christ:

This is not only a tremendous statement of faith, but St. Thomas is the only person in any of the four Gospel accounts to explicitly call Christ God.

This faith also led Thomas to go to similar extremes as St. Paul to preach the Gospel. According to tradition, he founded churches in Palestine, Mesopotamia, Parthia, Ethiopia and India. It was in the latter where he was martyred in the city of Meliapur when he was pierced by five spears.

Today, there is still a Christian presence on the southwest coast of India in the state of Kerala. Therein is enough inspiration for an entire campaign far removed from a lot of our normal FRPG tropes. 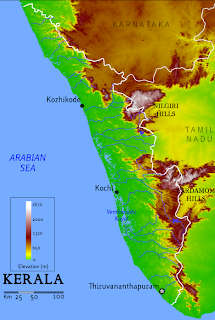 The region of Kerala provides a fantastic geography, quite similar to that found in the classic Known World map of the Expert Edition. It is a plain surrounded by mountains with a couple valleys that connect it to the rest of the world. There is an ancient paleolithic culture that has left ruins. There is religious diversity — predominately Hindu with sizable Islamic and Christian minorities. With the hagiography of St. Thomas, there is also a tie-in for five major relics — the spears that martyred the saint.

Possibly the most attractive aspect of this camping setting, however, is the fact that Kerala is the home to Kalaripayattu — a native martial art style. It comes in a variety of flavors and there is even a version practiced by Christians. In other words, not only is there is a perfectly legitimate reason for monks and other martial artists to be a base character class, but entire factions within the campaign world can be built around a particular style.

Another intriguing aspect of this setting is the weapons associated with both Kalaripayattu and the region. Some are typical D&D weapons:


However, there are a couple of atypical weapons:


It is this last that most intrigues me, and would beg for variable weapon damage so that it could do less damage than a normal sword, but be able to ignore shields.

Finally, it would give an excuse for using this alphabet:

It is called Malayalam for those who are interested. Beautiful, isn’t it?