I just finished watching the most recent episode of Nova, entitled Secrets of the Viking Sword. It focuses on the science of medieval weapons, in particular the Ulfbehrt Sword wielded by pagan Vikings from about A.D. 800 to 1000. 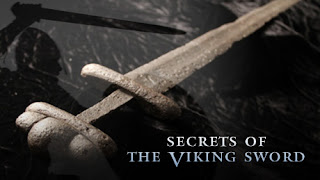 Most weapons of that time were made of inferior steel with low carbon content and slag impurities that made them brittle and therefore prone to break in battle. This stemmed from the fact that European forges could not get hot enough for the slag to separate from the iron ore and the fact that metallurgists of the time relied on the ashes of the fire to add what little carbon the steel had.

Ulfberht Swords, however, were made of a high carbon steel with very little slag called crucible steel — an art form that would disappear from European metallurgy for several centuries after the last Ulfberht swords were made. Crucible steel made these swords both stronger and more flexible — qualities that made them devastating in the the close-quarter fighting of viking combat. Indeed, the show had a demonstration of how, compared to a roman-style sword, the Ulfberht design could cut through chain mail.

I, of course, watched this show not only through the lens of history and science, but of a fantasist who loves to use history and science to inform how I play FRPGs. I couldn’t help but think about how the vast majority of magic weapons in OD&D are swords. The process for making an Ulfberht blade is extremely time consuming and unforgiving. Thus, they were rare and often given names. In other words, the magic sword of OD&D is the analog of these viking blades.

Some of the steps involved in the making of the blade invite FRPG elaborations:

The secret of creating crucible steel was most likely gained from the East, where they knew the secret of Damascus Steel, which differs only in the cooling process (which is much slower and results in its signature crystalline patterns). Thus, either the steel itself was imported via the Volga trade route or the secret of its creation was lost. This invokes the idea of mythical metals like mithril and adamantium.

All of this has me re-thinking the idea of magic weapons and weapon proficiencies in D&D. In context of a fantasy analog of medieval Europe, I could easily buy the argument that the only magic weapons available are swords. Crucible steel is not wasted on any other kind of weapon and therefore every other type of weapon is of inferior quality — non-magical.

In this scenario, I could also see the possibility of allowing every class to use any weapon with one major limitation — only fighters can wield those magical swords. This accomplishes several things at once: