Today is the feast of St. Nestor the Martyr, which is really an extension of yesterday’s feast — St. Demetrius the Great Martyr of Thessaloniki. During the reign of Maximian and Galerius, Maximian appointed St. Demetrius as proconsul of Thessaloniki, ignorant of the fact that Demetrius had been raised Christian. Part of the saint’s duties was to “Put to death anyone who calls on the name of Christ.” This wording gave the saint enough room to proclaim and teach Christ, without having anyone “call on the name of Christ.”

When Maximian learned that he had not only appointed a Christian proconsul, but that St. Demetrius was converting Roman citizens to Christianity, he immediately marched on Thessaloniki and sent his soldiers to find and arrest the saint. In the meantime, Maximian amused himself with gladiatorial games, especially those involving his champion Lyaeos, a gifted wrestler of great renown.

It is at this point that today’s saint comes into the story. St. Nestor was a disciple of St. Demetrius. Angered at the arrogance of Lyaeos, who openly mocked Christians and blasphemed Christ, St. Nestor went to St. Demetrius (who by this time was imprisoned) to ask his blessing to enter the arena and fight the emperor’s champion. With the saint’s blessing, St. Nestor entered the arena bolding crying out, “O God of Demetrius, help me!” He then landed a punch of such power to the chest of Lyeaos, that the champion’s heart exploded.

St. Nestor was arrested and soldiers were sent to kill St. Demetrius (yesterday). St. Nestor was killed with his own sword (today). As an aside, this story was not widely known outside of Thessaloniki until around the seventh century when the relics of St. Demetrius started to exude myrrh (the oil-based burial spice that the women were carrying to anoint the body of Jesus when they found the empty tomb). The relics have been doing this ever since. I’ve been to Thessaloniki myself, and even with the relics encased in plexiglass, you can smell the sweetness of the myrrh. 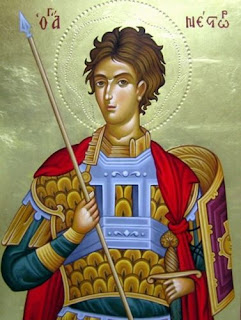 It is here that I have to confess that one of my favorite parts of this hobby (both as a player and a DM/GM/LL/Ref) is the henchman. I mention this, because when seen through the lens of D&D, what is St. Nestor if not a loyal henchman?

I realize that there are parts of this corner of the internet that look down upon the lowly henchmen as bothersome, useless, worthy of abuse and as an XP sponge. I would counter that they are full of potential, and when handled correctly by both player and DM/GM/LL/Ref, they can be the source of great stories — like that of St. Nestor.

For example, my Lost Colonies campaign is literally littered with former henchman. Headwaters has a cheese factory (specializing in halfling-made camel cheese), a successful tavern owned by a one-legged thief, where the concierge is a goblin-turned-half-elf magic-user and the cook is a gourmet frogman. On the road to Trisagia is a fortified bridge guarded by a half-giant. Even the recently built cathedral in the Elflands is tended to by a cleric whose beginnings were as a henchman of the current party.

Speaking of the party, take a look at how many of them were either once henchmen within the party that have been promoted due to PC death or retirement or are justified as potential former henchmen of retired PCs:


What makes all of these characters great PCs is the back-story each brings to the game due to the fact that everybody knows the 0-level place where they came from. Indeed, one of my favorite campaign ideas is to start off as a 0-level NPC and earn first level through adventure when no other adventurers are available. This idea has been around for years. Goodman Games used it back in the 3ed era with their modules Legends are Made, not Born and Halls of the Minotaur and has hardwired it into Dungeon Crawl Classics. I have been sorely tempted by all of these on more than one occasion.

Indeed, my own personal history with this hobby has been primarily spent playing lower level characters. I love seeing a PC take shape based upon what they manage to survive and how they manage to do it. Adding a good henchman into the mix just makes that journey even more special, because I get to see them develop as well.