I am either an Optimist, a Fool or Both

One of the most influential moments of my life was sitting next to my dad in a theater (that is now a parking lot) watching Star Wars for the very first time. When Lucas re-released Star Wars, I had a very intense flash back, and almost asked my friend sitting next to me, "Dad, is that guy dead?" after the first rebel was shot down by a storm trooper in the first minutes of the film just as I did the first time I saw the movie. 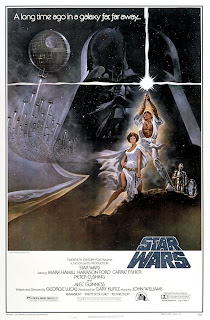 As a result, I am a "Han shot first!" kinda guy; however, I have never been a partisan. I acknowledge that Star Wars was George Lucas's creation and that he has the right to do whatever he wants to with it.  However, no matter how much George Lucas mucks with it, he can never take away that moment of magic when I sat next to my dad and watched Star Wars for the first time.

Thus, I am not as shocked or disgusted as some are at the news that Lucas has sold Lucasfilm to Disney and that they plan on making a new movie. Rather (once again) I acknowledge that Lucas can do whatever he pleases with his creation and am even a tad bit hopeful.

Before anyone calls me a fool, let me put this into context. The vast majority of fans agree that the prequels were, if not horrible, then disappointing. Further, I would argue that many of us think that Empire is the best movie of the bunch.

It is here that I would draw a parallel to the trajectory of Lucas and Star Wars with TSR and D&D. OD&D/Holmes are akin to the original Star Wars. Moldvay's Basic Edition is akin to Empire. The originals are awesome, but their sequels improve on that awesomeness. However, everything that follows is increasingly disappointing.

Yes, I enjoyed both Return of the Jedi and AD&D, but they weren't as good as what came before (I know AD&D came out at about the same time or, in the case of the MMI, before Moldvay, but the analogy still works in the trajectory of Basic comes before Advanced).

By the time TSR went under, the product being produced was a far cry from the original and, in a lot of cases, not worth the paper it was printed on — similar to how many of us feel about the Star Wars prequels. When TSR went under, WotC bought the rights to D&D, produced the OGL and ushered in the beginnings of the golden age that we are currently living in.

This is why I am a bit hopeful for the Star Wars brand. It took another company with a brand-new perspective to re-invigorate D&D. The same might very well be true of Star Wars. By the time the prequels came out, Lucas was too powerful for anyone to say no, and the story got lost in all the new toys that he had at his disposal, in the same way TSR was more interested in putting out product than in actually playing the game.

Maybe, just maybe, Disney will do for Star Wars what WotC did for D&D. Now I will grant that the best thing WotC did was to give the game to us via the OGL and Disney is not likely to follow suit with Star Wars so there is plenty of room for this whole endeavor to go disasterously wrong; however, I choose to hope.