Today is the feast of St. Theodora the Empress. Born into a military family, she was married to the last iconoclast emperor — Theophilus. Despite this, she was a secret iconodule and privately collected and venerated icons. After the death of her husband, she restored the icons in the churches for public veneration and liturgical use. This event is celebrated every year on the first Sunday of Lent. When her son Michael came of age in A.D. 857, she abdicated and joined a convent, where she lived out the rest of her life. Today, her relics are on the island of Corfu in the Church of the Most Holy Theotokos of the Cave.

Art has always played a huge role in my life, let alone my understanding of this hobby. My grandmother was an art teacher and through her diligence, patience and genius I actually provided for myself and my family for over a decade through the skills she taught me. Thus, I have a very deep appreciation for how and why we interact with art and how powerful it can be. For example, even though I do not hold this up as one of the greatest examples of RPG art, it nonetheless has powerfully influenced my own understanding of hobgoblins and their culture and has done so for decades: 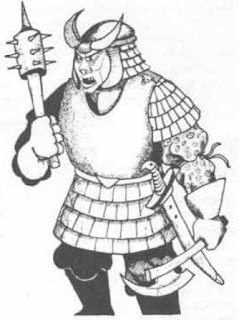 Orthodox iconography is no less inspirational or influential. For example, this particular icon, which depicts St. Mercerius wielding two swords (one of which is the sword of the Archangel Michael) inspired an entire series of adventures in my Lost Colonies campaign: 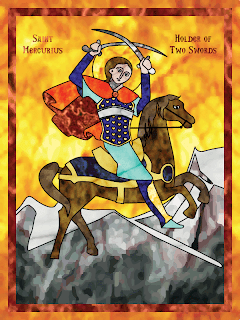 For those that don’t know, however, icons for the Orthodox Christian are much more than inspirational. They are personal. By the grace of the Holy Spirit, Christ and the saints depicted in icons are personally present through the icons. Thus, when you see an Orthodox Christian kissing an icon, we are not just kissing paint on wood, we are lovingly greeting old friends. Many Orthodox Christians will describe icons as windows of heaven — we get a foretaste of what heaven is by means of looking at (through) icons.

It occurs to me, that this may very well be one of the major sources for a trope within many of my campaigns — portals to other dimensions and realities. If icons are a portal through which the saints can be personally present within my life, it is an easy leap to introduce into fantasy the opposite — a party’s ability to go the other way through these portals.

Though such possibilities have long been a part of the hobby (Judges Guild’s Portals of Torsh, Irontooth and Twilight are favorites of mine), they are not as widely used or as enthusiastically embraced as one might expect. My own enthusiasm for them may very well be explained by my relationship with art and iconography.