I am going to deviate from my usual fair today, because tomorrow so many of us will be remembering the tenth anniversary of one of the most tragic events in U.S. history — certainly of my lifetime. Rather than remembering a saint, today I'd like to remember a building dedicated to a saint as well as the men and women who lost their lives in its vicinity.

While many of the talks we will hear and make tomorrow will be about the Twin Towers, there were three buildings destroyed that day in New York. Standing in the shadows of the Twin Towers was a little church called St. Nicholas. 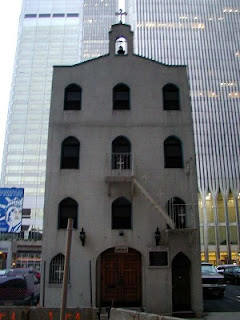 Forgive me while I do a little comparison. Gary Gygax died on March 4, 2008. I only knew Gary through his writing and the game he created with Dave Arneson. So I, like many who have found joy in playing that game in one or more of its many iterations, went back and read those words in order to hold on to what we had lost. What resulted from that memorial is what I have called a golden age in our hobby. We have gone back, rediscovered the magic of 1974, 1979, 1981, etc., made it our own and created all kinds of wonderful. In other words, every time we sit down at a table to play, we honor Gary, Dave, Dr. Holmes and all of those who labored to give us this game we love so much.

In contrast, when New York gathers to remember the tenth anniversary of 9/11, the destruction wrought by hate and the lives that hate destroyed, the very men and women who risked their lives to save people from the attack, the fire and the rubble will not be welcome (they were "honored" on the eighth). In addition, ground zero has been declared a clergy-free zone — on sacred ground where a house of worship once stood. You will excuse me if I think this an abomination.

I ask that all of us take time tomorrow to honor the dead, honor those they left behind and honor those who risk their lives on a daily basis so that we may be free and safe to play the games we play. I also ask that we consider that maybe one of the reasons that a hole still scars the city New York ten years after two planes were deliberately flown into the Twin Towers is that we have not only turned away clergy, but God Himself.