Today is the Feast of St. Dionysius the Archimandrite of St. Sergius Monastery. Born in 1570, St. Dionysius was the head of the Staritsky Dormition monastery (northwest of Moscow) and then, beginning in 1611, St. Sergius Monastery (northeast of Moscow). He died in 1633. Thus, he lived through the entirety of the Time of Troubles, an era plagued by succession wars, foreign invasions and famine. He was foremost aid to St. Hermogenes, Patriarch of Moscow who himself was imprisoned by Polish-Lithuanian invaders who sought to impose Catholicism on the Russians. St. Dionysius also set up a house and hospice for the injured, sick and homeless. He also ordered that his own monks distribute the best food they had to the poor while surviving on the left-overs.

Dionysius himself was jailed. Ironically, it was by his fellow Orthodox and not the Catholics. During the chaos of the Times of Trouble, discrepancies began showing up in service books. Therefore, Dionysius got involved in trying to remedy the situation by comparing current editions with both ancient Slavic texts and Greek texts. Without understanding what he was doing, the local officials accused him of heresy at Council in 1618. At the intervention of Patriarchs of both Moscow and Jerusalem, he was released and reinstated in 1619.

He is buried at St. Sergius Monastery. 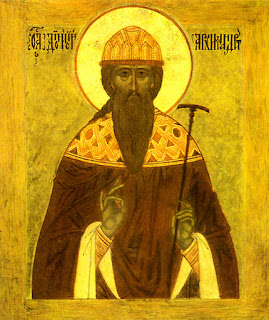 For those who like to put a bunch of politics in their campaigns to create adventure ideas, interesting background noise and opportunities for players to have a huge impact on the campaign world, the Time of Troubles is excellent source material. The Time of Troubles refers to the years in-between the death of the last Tsar of the Rurik Dynasty in 1598 and the establishment of the Romanov Dynasty in 1613. There are several events that could provide center-pieces for major campaign events:
In the end, all of this foreign meddling (especially the attempts to impose Catholicism) united the Russians as a people across classes and out of the ashes rose what became the Russian Empire.