Today is the Feast of St. Cornelius the Abbot of Komel, Vologda. Born into a boyar family in the 15th century, his brother Lukian served at the court of the Great Prince of Moscow. Both brothers decided to enter into monasticism at the monastery of St. Cyril of White Lake (how cool is that name!?).

Desiring for a more solitary life, St. Cornelius left White Lake to enter other monasteries, but eventually chose to live in the inhospitable environs of the Komel forest. Other monks began to gather around him and in 1501 he built a wooden church dedicated to the Entrance of the Theotokos. By 1512, the brethren had grown so numerous that he built a stone church and compiled a Monastic Rule based on those written by Sts. Joseph of Volokolamsk and Nilus of Sora. 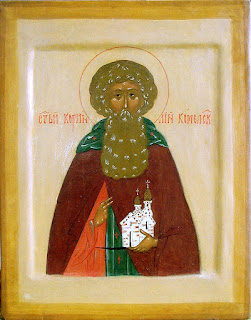 As I explained in this seven-year-old (!?) post, there are two basic forms of monasticism: cenobitic (communal) and eremitic (hermit-like). The monastic rules found in Russia tend to be of a third type: the skete. It takes elements of both eremitic practices, allowing for the isolation of individual monks, and cenobitic practices, allowing for a community of monks to live in close proximity.

In other words, there really is no single “right way” to be a monastic. Depending upon the individual and the relationships that individual forms, one can be called to be a part of several different styles of monasticism. Indeed, many monastic saints, St. Cornelius included, practice several different types over the course of their lifetime.

In the comment section of my last Saintly Saturday post, there was a joke about edition wars in D&D. Admittedly, when I first started to blog about RPGs, I wrote several serious criticisms of “new-school” D&D and I will openly admit that the idea of playing 3e, 3.5e, Pathfinder or 4e sounds about as much fun as doing some major dental work. Today, however, I won’t begrudge (too much) someone else’s fun. Sure, I believe they would have more fun at my table and the way I like to play, but I also know from experience that isn’t a universal rule I can depend upon.

I have argued that we live in a Golden Age for RPGs. One of the reasons for that is that we, as players, have at our finger tips 0e-5e D&D and all the various clones of those editions out there to choose from and hack ourselves for our particular proclivities and our particular needs. In the same way monks have a plethora of opportunities to pursue the ascetic life, we gamers have a plethora of choices as to which rules we want to bring to the table to have fun with.

Recently Eric of Tenkar’s Tavern reported that WotC estimates that there are 12 to 15 million D&D players in North America and that there was a 44% growth for the D&D brand in 2016. Note that this is just the brand, not a specific edition. While I will openly admit that most of the growth can probably be attributed to 5e (and that is not a bad thing), I am guessing that no small percentage of that comes from older editions. Else, why does WotC keep on churning out publications for older editions in both PDF and POD forms? There was a time when I thought such a move by WotC would never happen and I cannot tell you how happy I am that they continue to open up that library.

In other words: play the version of D&D that you want to play and have fun! If that version doesn’t exist, make it! Today, we have so many tools at our disposal to do just that, we barely have an excuse not to.

To that end, one of my episodes of Gamer ADD which I have been subject to of late, was due to the WotC news Eric reported. I like the concept of 5e, but I don’t like its presentation, its editing or the relative complexity of the rules as they exist today. Erik took what were really simple rules (S&W White Box) and stripped them down as much as possible to still have a game we would recognize as D&D and S&W: SWL and SWCL. My Gamer ADD-addled brain thought why can’t I do that for 5e?

Thus, one of my wayward projects is editing the 5e SRD down to a rules-lite version of the game which I would gladly play and even Referee. Hopefully, I’ll have some presentable stuff done sooner rather than later to share.