Gamer ADD: Toward and Old School version of 5e Part 2

One of the things that drives me batty about 5e has nothing to do with either the system or the mechanics. I really despise the presentation and layout. Awhile ago, I did an experiment to see if I could to a “Player’s Guide” for my Lost Colonies campaign world for 5e. It was a nightmare. Trying to figure out what a class can do at any given level is a chore that can result in looking up several different references in different parts of the rulebook. The process was so headache-inducing that I gave up trying.

When my Gamer ADD-addled brain started thinking about treading down the 5e road again, I did not want the published core books (or any other books) involved. Dealing with just the SRD (while still too complicated in its presentation) makes things easier to deal with.

Thus, when thinking about an Old School Hack of 5e, I want the presentation to be simple and easy to digest. One easy editorial decision that will make that process easier is to limit the number of levels covered in the game. 0e covers Fighters and Clerics up to 10th level and Magic-users to 16th. I have been playing this game since 1979 and I have only seen two characters make it to 9th level. I played one (a bard in 3.5 that retired at 9th level) and the other was a PC in my Lost Colonies Campaign (LL). Thus, from a practice experience POV, having a game only cover levels 1-10 seems perfectly reasonable to me.

Of course, my experience is almost exclusively with xp being awarded according to older rule-sets where xp is not only harder to come by, but 1xp=1gp is the primary means of gaining xp (and in some cases it’s Arneson’s 1xp=1gp spent). Thus, in order to make levels 1-10 feel like a complete game, the xp needed for each level is going to need a slight overhaul.

In 0e an 11th level Magic-user needs 300,000xp. Conveniently, if one were to use that number for the xp needed to get to 10th level, halving that for each level (effectively doubling the xp needed for each level) the xp needed to get to 2nd ends up being 1000. This number is half as much as what is needed in older editions of the game (thus, making leveling faster/easier for the modern gamer context) but is much higher than the 300 needed in 5e as written (which helps placate my own old school proclivities).

Given this info, here is a rough draft of the kind of layout I have in mind for this project: 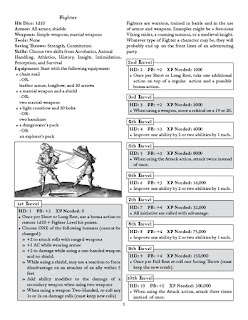 Yes. That is ONE page for everything needed to play a fighter from 1st-10th level.

Note that there are a couple of changes from the SRD for the fighter: