Today is the feast of Sts. Sergius & Bacchus the Great Martyrs of Syria. The Roman Emperor Maximian (A.D. 284-305) appointed these two saints to high positions in his army, ignorant of the fact that they were Christians. The saints were subsequently accused of refusing to sacrifice to the idols by those envious of these positions. The two were arrested and, of course, confirmed their refusal.

As a consequence, they were stripped of their military insignia, stripped of their clothing, dressed as women and paraded through the city streets in mockery. Afterwards they were tortured. Bacchus died by scourging and Sergius was beheaded after being placed in iron sandals with nails in the soles. 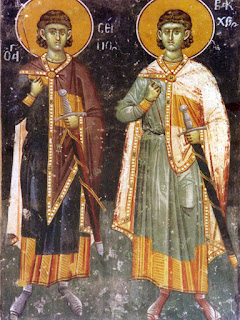 This story reminds me of several folks I have encountered in my dialogues about religion that simultaneously criticize Christianity for its cruelties and romanticize various forms of paganism. When we romanticize things, we tend to fall into the trap of anachronism — we impose our own modern values onto something from the past that cannot have possibly been associated with those values.

Today, transgenderism is a hot topic and here we have pagan Rome dressing up men in woman’s clothing as a punishment, demonstrating the large disconnect between the most current modern value fad and ancient pagan values.

While some may quibble or be downright offended by my use of the word “fad” in context of transgenderism, I insist upon it because our political class has fetishized the concept to the point where we can’t actually deal with transgenders as people because they are being used as an excuse to inflame political debate.

I am also reminded of the various old-school cursed magic items that would permanently change the sex of its user as well as the various Reincarnation spell tables that bring back dead characters as anything from badgers to trolls. Believe it or not, as a Christian I actually like these aspects of old-school gaming.

Recently, I have been involved locally with dialogues on the topic of racism. I keep running into the fallacy that people cannot understand what it’s like to be ‘X,’ completely ignoring the old adage that we should walk a mile in another man’s shoes. In their own way, RPGs allow us to walk that mile. We get an opportunity to experiment with ideas and thought processes that are not entirely our own.

As a player, one of the most magical moments I experience in play is when my character insists on doing something that I would not. It is precisely in these moments that characters come alive and I get to experience wearing those shoes.

As a Christian, this is an extremely important exercise, because it ultimately makes it easier to see the image and likeness of God in others. If I can empathize with others and understand why they do and think what they do and think I can see them as people rather than a political tool used to gain and maintain power.

This all made me think of an interesting twist on the concept of the Elven Boot and Elven Cloak. Rather than aiding the wearer in being sneaky, these items endow the wearer with the ability to adventure as another class in the same way that Elves in 0e would choose to be either a Magic-user or a Fighter before each adventure, earning experience only in that class. Thus, there could be three different types of boots/cloaks: Fighter, Magic-user and Thief (elves don’t really do the Cleric thing). As long as the character is wearing the Elven Boot/Cloak they can adventure as and gain experience in the class associated with the item. Should the item ever be lost or destroyed, the character loses all those XP and abilities.