Today is the Feast of St. Hilarion the Great. He was born in Gaza in Palestine to pagan parents who subsequently sent him to Alexandria (Egypt) for his education. There he encountered Christianity and was baptized. He also encountered stories of the Father of monasticism, St. Anthony the Great. Inspired, he decided to follow in Anthony’s footsteps and dedicated the rest of his life to asceticism.

As an aside, St. Athanasius the Great wrote the hagiography of St. Anthony which was translated into several languages. It inspired an entire generation of Christians after the legalization of Christianity in the Roman Empire to head off into the desert and follow the monastic life. I am always surprised by how inspiring this account of St. Anthony remains to Christians even in our modern age. I cannot recommend it enough.

St. Hilarion returned to his home in Gaza to find both his parents had passed away. He gave away all of their belongings and went into the desert. He was soon caught up in a fierce spiritual battle. There are accounts of demons that took the form of phantoms, crying children, wailing women and wild beasts. He endured through it all and became well known as an exorcist and healer. So popular was the saint that he had to flee, lest he be tempted by pride and overwhelmed by the sheer amount of those seeking his help.

Therefore, he became a wanderer, never staying long in any one place, healing and exorcising where ever he went. His journeys took him to Egypt, Libya, Sicily and finally to Cyprus where he passed away at the age of 80 in the year A.D. 372. 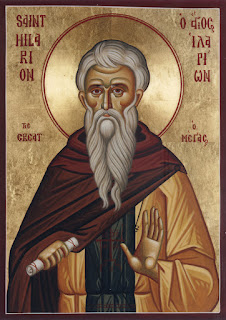 In St. Hilarion, we have part of the historical archetype of the D&D cleric. He is akin to a wandering adventurer who heals and fights off demons. It is easy to see in his story analogs to Turn Undead and such cleric spells as Detect Evil, Cure Light Wounds, Cure Disease and even Protection from Evil. I know that folks have argued that Clerics are not a good fit in D&D because we don’t have a literary archetype that fits the clerical mold, though I would counter with REH and Solomon Kane, and some would even go as far as to argue that we don’t have an historical archetype, either.

While St. Hilarion is not exactly a plate mail wearing, mace wielding warrior, neither are many of our favorite literary archetypes exact fits to D&D classes. Gandalf doesn’t cast flashy spells and carries a sword. What class, exactly is the Gray Mouser? or Fafhrd for that matter? In other words, as I have long argued, for those of us who love the class, clerics definitely belong in D&D.