Today is the feast of St. Cosmas the Composer and Melodist who was not only a contemporary of St. John of Damascus (a famous 7th-8th century saint who wrote against iconoclasm) but was an adopted member of the family. He was elected bishop in the 8th century to a coastal city in Palestine. He was also an excellent hymnographer. Among his many compositions are two Canons that are still sung in the Orthodox Church today: the Canon of the Cross and the Canon for the Nativity of Christ. 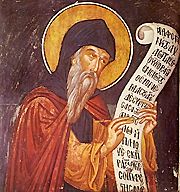 Earlier this week, when I looked ahead to see who the saint was for today, I was left with a very tough question: What to do with a hymnographer? It is a reminder that D&D (and most RPGs, for that matter) don’t really have a place for someone like St. Cosmas. Yes, the argument can be made that he represents a Christian version of a Bard, but, not only do I not really like virtually any iteration of that class, I don’t think any version can easily be re-skinned to fit a St. Cosmas.

This leads me to a bit of Gamer ADD I have been suffering from lately. I’ve been distracted by Warhammer Fantasy RPG, the Mithgarthr “retro-clone” of 5e and Swords & Wizardry Continual Light. While absorbing so much awesome, my brain came up with an interesting challenge that I think answers the “problem” of St. Cosmas better than simply calling him a Bard:

Knowing what I know today in October 2017, what if I suddenly found myself back in the late 80s at the beginning of the end for TSR when my friends and I started drifting away from D&D? What would I do to modify D&D to make it enticing enough for my friends and I to continue to play realizing that I would have no access to the huge library of .pdfs and books that I have now? What resources could I use?

The first thing that came to mind is the idea of a 0-level character. Not only do I love this idea, but my friends probably would have as well because we reveled in the challenge of low-level play. I owned the 1st edition of Warhammer Fantasy RPG and it has an awesome list of careers that a potential 0-level character could come from.

Secondly, my friends did like the idea of the proficiency system that was being developed in books like Unearthed Arcana and Oriental Adventures. Why not take some of the skills from the Thief class, some of the skills from WFRP and use them in the broad sense suggested by both WFRP and 5e where each characteristic gets several skills associated with it?

Finally, this all has to exist on a random table that also allows for some customization. Therefore, each career would have the ability to move around some ability scores and a choice of skills to specialize in.


Skills: Players can try to justify doing anything under the pretense of a skill. PCs can automatically succeed at the DM’s discretion. Any character can use any skill at a base success rate of 1 in 6. Each career offers three skills that can be specialized in. The player prioritizes these specializations at character creation. At 0-level these three skills have a base success rate of 9+, 12+ and 15+ on a d20. As a character gains levels, these chances improve by 1 per level (8+, 11+, 14+ at 1st level). A roll of ‘1’ always fails

Each PC would fight as a 0-level human with d4 hit points. 1st-level would be attained after one adventure.