Gamer ADD: A Map of the Haunted Keep


In the ancient days when the Shorsai Forest was part of great expanse of woods that made up the Forest Kingdoms, an elven queen of great renknown by the name of Mabh died a tragic death. With great pomp, she was entombed in a burial mound with some of her most prized possessions.

As the ages passed, the Great Forest receded and Shorsai Forest became part of the Wilderness. The legend of Queen Mabh passed into distant memory. With the coming of man came a desire to tame the Wilderness. The first settlers of the area built a keep upon a rise within a clearing in the middle of the Shorsai Forest. Little did they know that they were building on the burial mound of the long forgotten Queen Mabh.

For many years, the keep served its purpose well by keeping the forces of Chaos at bay. Save for strange dreams that sometimes haunted the inhabitants, the keep began to thrive. Things changed, however, when the keep was expanded. Rumors warned of a gathering army of humanoids to the north. Therefore, a tower was built to help protect the keep in case of a siege. Due to the movements of time and earth, one of the prized possessions of Queen Mabh had been displaced to the ground where the tower was built and the short sword Dawnbringer fell into the hands of men.

This greatly angered the spirit of Queen Mabh and she reached far and wide to find her brethren to take revenge on those who had stolen her prized sword. With dreams she pleaded with elven heroes to find the Siege Seed to destroy the keep’s walls and to kill every one inside.

Finally, an elf by the name of Ionhar answered the call and completed the task to find the Siege Seed. Raising an army he drove north out of the Forest Kingdoms and laid siege on the keep. While the bulk of Ionhar’s forces attacked the keep’s tower, a small force snuck behind to bury the Siege Seed at the base of the keep’s northwestern wall. A great tree sprang forth from the earth, tearing a huge hole the the keep’s defenses.

Before the elves could overrun the keep, however, the humans retreated to the tower, where they were able to seal its only entrance with a great stone. Unable to bypass the tower’s defenses, the elven offensive ground to a halt.

Enraged at the failure of the elven forces, the spirit of Queen Mabh turned to necromancy. She cast a spell that doomed her soul to undeath and enveloped the entire keep in a life-draining green flame. Elf and human alike were consumed. No-one has seen the Dawnbringer since that fateful day.

Since then, the keep lay in ruin and came to be known as the Haunted Keep due to the strange green glow that could sometimes be seen at night coming from the ruins. Whether the glow comes from Queen Mabh herself, the ghosts of the armies that once fought over the keep or if it is merely the trickery of the fey that have since come to make the Shorsai their home no one knows. 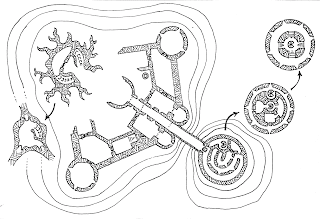