Gamer ADD: A Ghast at the Possibilities

As far as I am concerned, the mark of a really good monster folio are those little phrases that allow you to completely rethink another type of monster. As an example, the idea that hobgoblins hang out with carnivorous apes according to the MMI gives me permission to do this.

I took advantage of the Swords & Wizardry Appreciation Day sale by Frog God Games and picked up Tome of Horrors 4 because, as I said yesterday, Tome of Horrors Complete is one of my all time favorite collections of monsters. The fourth installment of the series is less immediately useful because it errs towards the high to really high level spectrum of adventuring (there are more creatures with a CL18 than either CL A to 1 or CL 2 and there are over 30 creatures with a CL of 20+) and I do not care for the fact that all the illustrations are in color, but it does qualify as a really good creature catalogue because of a little blurb under the listing of the Banshee Queen:


Any male slain by a banshee queen’s magic rises to become a ghast in 1d4 rounds.

I have to be honest, I have never really used ghasts in my adventures. Once you get beyond the point where ghouls get used as the go-to-undead, there are so many more evocative creatures in the catalogue of undead than a beefed up ghoul. Why dip into that well again?

Given the fact that fey are playing a large role in my most recent case of Gamer ADD, I was attracted to the idea of a queen banshee, given that it is an undead fey. When confronted with the idea that the source of ghasts may very well be a queen banshee, I had to take another hard look at the ghast:


Ghasts are highly intelligent ghouls. Their charnel stench is so powerful that anyone nearby (about 10ft) must make a saving throw or suffer a –2 penalty on attack rolls.

Note that phrase “highly intelligent.” This is no mindless zombie hanging out in grave yards digging around for scraps. A ghast has the potential to be a master-mind, a main villain, the mover and shaker behind the scenes that pulls the strings of an entire campaign. Given the fact that ghasts reek to the point that anyone in the immediate vicinity is going to be sick, they would have to use subordinates and agents to do their bidding.

This begs the question: what would a highly intelligent undead that couldn’t walk around civilized society want out of undeath? I could easily imagine an undead version of Hannibal Lecter waxing poetic about the various gastronomical possibilities of elves versus humans, but what if a paladin or a cleric found themselves trapped in their own stinking corpse plagued by an insatiable hunger for human flesh? That phrase “highly intelligent” does not translate immediately into “slave of the banshee queen” or even “willing servant of the banshee queen.” 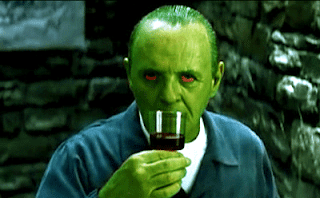 Imagine, for a moment, a former paladin who seeks to use his new lot in un-life to do what good he can, given the fact that he is a rotting corpse who needs to eat people. The idea of a cloaked and masked avenger wandering the streets at night putting fear in hearts of the criminal element has never so haunting, because he would be literally eating them. 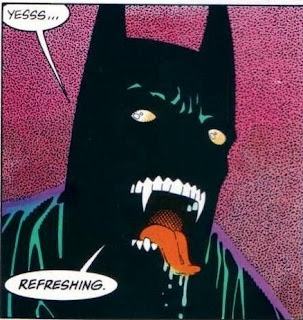 Or imagine a someone unwillingly turned into a ghast who then spends his entire un-death trying to take revenge on those he thinks responsible: elves.

Or imagine a ghast pouring over necromantic tomes in a desperate quest to move up the ranks of undeath, so to speak.

I think I am going to have to include ghasts far more often in my campaigns, because the possibilities are endless…