As someone who regularly suffers from Gamer ADD, I am occasionally reminded about how many projects I have left fallow over the years. One such reminder came  yesterday when Rob Conley of Bat in the Attic Games posted a set of S&W compatible rules  as a prelude for a project he is working on. In contemplating all the various things I have not managed to finish, the one I am most disappointed with is my version of Averoigne and its megadungeon, the Chateau des Faussesflammes. One of the reasons for this was that I ran into a problem of how to stock and handle what I envisioned as a dynamic and constantly changing dungeon.

As I have mentioned many times before, historically, I am actually more of a war gamer than a role-player. Recently, I have spent more time at the gaming table playing board games than RPGs. As a consequence, I was inspired to look at my version of the Chateau as if it were a board game rather than an RPG dungeon. What I came up with is a rather intriguing idea and I wanted to see if it was scalable.

Let's begin with a really big dungeon. This is from Dyson Logos and he calls it The Deep Halls:

I haven't counted carefully, but I estimate that this beauty has about 150 rooms. According to older iterations of the game, approximately one third of these rooms will have monster encounters or 50. 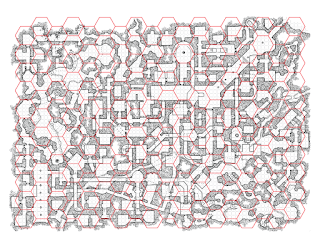 This grid provides almost 200 spaces. The idea here is to place tokens on this board that represent monster encounters. They exist on a grid so that they can move during the adventure from one hex to the next, with each hex being about 30 feet per side and thus easily moved through by just about every monster that might inhabit a dungeon. In order to give myself enough room to maneuver these tokens, I arbitrarily decided to place one token in about every four hexes: 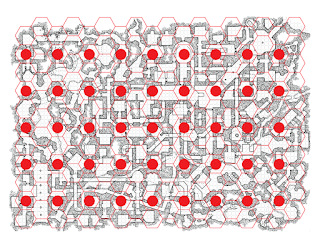 This provides 45 monster encounters. This is close enough to the traditional 50 to leave it at that, or one could have five set-piece encounters that exist in specific rooms that never move. Now, here is where things get interesting. Forty-five divides nicely by 3 giving us the ability to divide the monster encounters into three different factions: 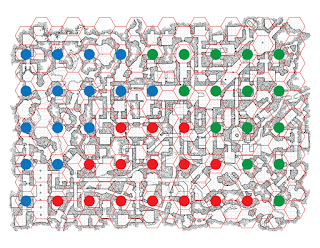 When stocking a dungeon this way, one really doesn't have to stock the dungeon at all. Sure, you have to make notes about room characteristics and various kinds of traps, but there really is no need to place any monsters at all (again, unless you are married to the idea of set-piece encounters and then you only have to do up to five). What you do need is three lists of 15 monster encounters representing the three factions and a wandering monster list.

So here is how it works:

Every time a wandering monster check is triggered (either by a loud noise like combat or simply time spent in the dungeon), roll your favorite type of die to check if a wander monster shows up. For the purposes of this example, let us use a d6:


Alternatively, a 1-3 indicates how many tokens to move one hex. Regardless, which token to move and where is entirely up to the whim of the Referee. For example, in the middle of the second row there are a blue and green token in the same room. I would most likely move those closer to each other at the first opportunity.

This leads us to one of the more interesting facets of this idea: when two tokens of different factions end up in the same hex, they get to fight. This leads to a noise encounter that the PCs get to investigate or ignore at their leisure. In the meantime, one your tokens comes off the board and you make a note about bodies being strewn about the floor.

Here is the part I personally like best: when the PCs enter a hex with a token or tokens, they get to have a monster encounter. At this point one of the 15 monster encounters can be randomly assigned to that token. In other words, every monster encounter is as much a surprise for you as it is for your players. If the players prevail, that encounter is marked off the list and the token is removed.

Once the players have wrecked havoc,  you have a very tangible and tactile way to restock the dungeon: place new tokens according to the way the dungeon currently looks. New factions can suddenly make their move to gain territory or one faction can bolster their territory as they have been left unscathed by the activity of your PCs. Or whatever.

What really attracts me to this idea, however, is the level of danger that gets placed on every wandering monster check. Not only could a monster get spawned from the WMT, but one of the regular monster encounters of the dungeon could come investigating the noise being made by the fighter trying to open that locked door.