Meditating on Golems and Superheroes

I got to see Ironman 3 last night and given Tony Stark’s use of all the various versions of the Ironman suits with a kind of remote control as well as the trailer for the new Superman movie (which preceded this latest Ironman movie) got me thinking about golems.

Anyone who has played D&D is familiar with the concept of the golem — a figure made out of various materials and brought to life as an automaton. One of the original source materials for the concept is Jewish in origin. There are a variety of stories that involve man trying to duplicate God’s creation of humanity. An anthropomorphic earthen vessel is created and given life; however, the end-result is always imperfect and often dangerous. Thus, the core of the legend is a cautionary tale about hubris.

The most famous golem-tale is that of the Golem of Prague. The 16th century rabbi Judah Loew ben Bezalel is supposed to have built a golem out of clay from the banks of the Vltava river in order to protect the Jews of the Prague ghetto from the pogroms of Rudolf II. In the classic tale, the golem was eventually destroyed by the rabbi when he forgot to let it rest on the Sabbath; however, there are versions where it becomes a monster that goes on a murderous rampage.

In this sense, Superman can be seen as a type of golem — at least as a concept in the context of his creation. The father of Jerry Siegel, one of the creators of Superman, died during a robbery attempt of his Cleveland, OH clothing store in 1932. In addition, the creative irony of the use of Nietzsche’s Übermensch by the Nazi party when compared to Superman, who was portrayed by the Jewish Siegel and Schuster as an alien defender of the downtrodden, poor and defenseless, cannot be ignored (image from here): 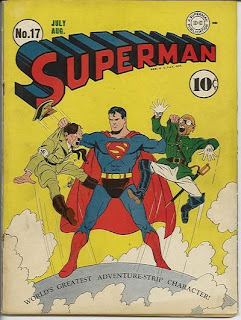 However, something interesting happened with the golem Superman — despite his superior abilities and alien physiology and origin, he deeply identified with humanity. His upbringing as Clark Kent formed the foundation upon which he became a hero rather than a monster.

Indeed, I have often argued that the superhero of the Superman stories isn’t the Superman persona, but, rather, Clark Kent — precisely because he strives so hard to be a human being. I also believe that it is one of the keys to his long-term success as a literary character and one of the reasons that, despite my preference for normal human comic book characters like Batman and Green Arrow, Superman is one of my favorite superheroes. I can’t help but respect him, not because he is so irritatingly powerful, but because he tries so hard to be human despite all that power.

In a way, all superheroes are golems and the best ones are those who struggle with their own humanity (or, as Superman, to be human). One of the reasons that I collected DC rather than Marvel at the height of the popularity of the X-Men and Wolverine during the 1980s & 90s was due to the glorified golem qualities of Marvel’s Mutant Universe.

As is often acknowledged, the mutant story lines serve as a commentary on whatever shade of bigotry one wants to explore; however, other than the Us vs. Them bigotry, the concept of Homo sapiens superior is rarely, if ever, compared to what it means to be human. As a result, the debate is often stuck at: Should we make war against humanity or Should we be magnanimous and protect humanity? It always bothered me that both cases infer the inherent inferiority of humanity. The question of what it meant to be human never became a foundational principle like it did for the Superman character.

Therefore, all of Marvel’s mutants all end up being merely golems.

As with the original stories about golems, the concept is most powerful when it is an expression of hubris and its destructive consequences. Ironically, there are a plethora of monsters in D&D that are better at being golems than golems on this score. My two favorites are orcs (especially if understood in Tolkienesque terms as the result of twisted experiments on elves) and owlbears (which are described as the result of a twisted experiment by a magic-user).