Today is the feast of a very popular saint among monastics — St. Theodore the Trichinas. The title Τριχινᾶ refers to his practice of wearing a hair shirt. He grew up in a pious family, chose the monastic life and entered into one of the monasteries in the imperial city of Constantinople. He wore the hair shirt the rest of his life.

For me, the most interesting part of St. Theodore’s story happened several centuries after his death in the late 4th/early 5th century: a liturgical poem called a Canon was composed for St. Theodore by one of the great hymnodists of the Orthodox Church, St. Joseph the Hymnographer. 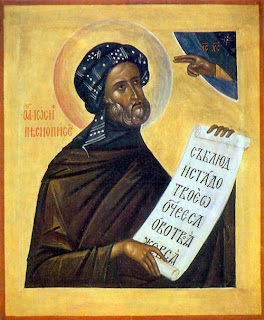 Continuing with my theme that the monastic life is a good metaphor for D&D if one externalizes the internal struggle that the spiritual warfare of the Christian life holds, here are some interesting excerpts from the Canon for St. Theodore written by St. Joseph:


Cutting down the assaults of passions with a spiritual sword, O righteous Theodore, you raised up trophies of victory against them; wherefore you have been crowned with graces of miracles and healings. — Ode One

With vigorous abstinence you slew the beasts of the flesh, O righteous Father, and made manifest all the powers of the soul. — Ode Three

With temperance, you killed the passions O Theodore and became a divine habitation of the Holy Spirit, by Whom you have gushed forth gifts of healings for all. — Ode Four

You broke the arrows of the foe, O righteous Theodore, using the arms of humility against him; and with the co-working of Christ, you have carried off the victory. — Ode Six

When you stretched out your hands to God, O righteous Father, you muzzled with prayer the noetic beasts that gaped against you; and in joy you did chant with a pure mind: O all you works of the Lord, bless the Lord — Ode Eight

Since this time of year is so very busy, I am not going to have time to do more than pull some of the interesting possibilities that might be externalized for a D&D campaign:


I wish I had more time to play with some of these ideas. For those not staring down the end of Lent and Holy Week, maybe some of these will inspire something more than a bullet point.