This weekend, I finally got around to seeing the 2011 Green Lantern movie. I had been avoiding this due to the bad reviews it received and my own immense distrust of everything Hollywood. Green Lantern has a special place in my heart because my first real exposure to the medium of the comic book came through a bunch of Hal Jordan stories. 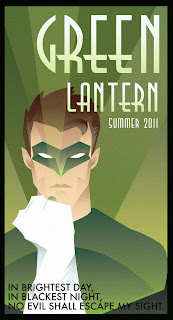 I have to admit, I was pleasantly surprised, but for a completely unexpected reason, because the reviews were right — this was a deeply flawed movie. The reason (unsurprisingly) is theological: The Green Lantern Movie is an excellent primer on the Christian heresy of Arianism. It beautifully illustrates the basic tenets of its beliefs, what those beliefs look like and, ultimately, its fatal flaw.

Arius famously stated that there was a time when the Son was not. Rather than uniting humanity to the being of God, Christ merely united us to His Will. Now, take a listen to the opening sequence to the GL movie:


The Guardians of Oa are described as immortal — they are the Arian Christ figures of this story. They created Oa as a means to allow access to the most powerful energy in the universe: Will. The rings can be seen as a stand-in for ordination: the GL corp is the clergy of the Arian Church. They go about ensuring that the universe bends to the Will of the GL corp creed:


In brightest day, in blackest night,
No evil shall escape my sight.
Let those who worship evil's might,
Beware my power, Green Lantern's light!

There are two fatal flaws with this cosmology:

The first is magnificently illustrated by the fascistic overtones of the GL Corp led by the charismatic Sinestro: What is evil? In a world where the Guardians are willing to make a weapon like the Yellow Ring and the leader of the GL Corp is willing to use it, evil devolves into the relativism of whoever owns the biggest baddest weapon and is willing to use it gets to determine what is good and what is evil. Historically, the biggest proponents of Arianism were the Emperors for exactly this reason.

The second is wonderfully embodied by the movie’s main villain Paralax. According to the movie, Paralax is one of the Guardians who became overwhelmed by the yellow energy of fear and subsequently became a threat to Oa and the the Guardians themselves. I hope I won’t spoil anything for those who have yet to see the movie, but Paralax is ultimately destroyed by being lured into the sun.

All of this demonstrates the ultimate problem of Arianism. Though they are immortal and grant access to Will, both the Guardians of Oa and the Arian Christ are created beings. Ultimately, this means that they have a beginning and an end. Therefore, we gain nothing by uniting ourselves to them, other than a very temporary access to power. In the end, we all end.

This is why the Church fought so vigorously against Arianism in the fourth century. It completely undermines the true Gospel — God Himself became a human being in the person of Jesus Christ so that we might overcome our end and share in Christ’s eternity.

Therefore, I really liked this movie (despite the fact that in just about every other aspect is was barely average). It goes to show that the politically correct assumption that all religions are basically the same and that those of us who believe in some kind of divine being are all just going to end up in the same place by different paths is itself fundamentally flawed.