Today is the feast of St. Martin the Confessor. He was born in Tuscany in the 7th century. Prior to being elected as bishop of Rome, he served several years as a papal legate in Constantinople. During the reign of Emperor Constans II (A.D. 641-668), St. Martin was encouraged by the emperor to support a theological treatise called The Typos. Not only did St. Martin not support it, but convened a Lateran Council in 649 to condemn it.

The Typos espoused a heresy called Monothelitism, which held that there is only one will and energy in Christ. This runs counter to St. Gregory the Theologian’s axiom that whatever part of humanity Christ doesn’t assume as His own isn’t saved. Thus, under Monothelitism, our will and energy are not saved because they are not part of Christ’s humanity. To put it simply: the salvation of a Monothelite Christ is incomplete.

As a result of his defiance, St. Martin was arrested in A.D. 653 under false charges (conspiring with the Saracens) and exiled to Cherson on the Black Sea. He died there two years later. 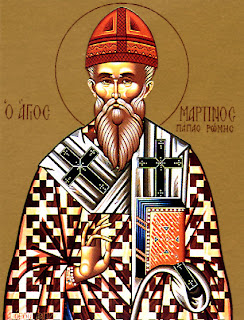 Given that so much of St. Martin’s life is centered around Rome and Constantinople, it has me meditating upon one of the campaign tropes that I personally have the least experience with: The City. There was a brief period where I toyed with the idea of an urban campaign, but it proved to be short lived. It is a style of play that requires a level of detail that I am not good at, nor is it the easiest medium for the improvisational style I prefer to play.

Of course, The City State of the Invincible Overlord was never something that I or any of my friends owned back in the day. For those unaware, Judges Guild just released The Guide to the City State which is Bob Bledsaw’s original in-house 1976 edition. Though a delightful read, (I especially find it fascinating that many of the rumors to be found are about events that are supposedly occurring right now), I am not convinced that had my friend’s and I had access, that we would have had any more interest or success in urban campaigns.

The Invincible Overlord is portrayed as an inaccessible, untouchable and indifferent ruler whose only real interest is maintaining power. In contrast, the denizens of dungeons and wilderness areas are tangible things that can be encountered and overcome, if need be. I can understand the need for an Invincible Overlord — it simplifies the urban environment by keeping things at the immediate street level; however, I know my friends and I would have preferred a campaign that would allow us to be like St. Martin — to stand defiantly against the unjust rule of the Overlord/Emperor.

Unfortunately, this adds a level of complication to the urban environment that is much easier to handle in the classic dungeon/wilderness campaign. In the former, politics can color every single aspect of the game, and keeping track of all the various factions can be a real headache (at least for me) — even when the players are not that much interested. In the latter, politics can be kept at a background noise level until such time that the players choose to scratch that itch, by which time they have probably established strongholds or are seeking places to do so. As such, the political situation can be very simplistic and even binary.

Thus, whereas St. Martin’s life took place in urban environments with complex political issues, being able to emulate his conflict with Emperor Constans II is much easier in context of the classic dungeon/wilderness environment.