Ouch. The last few days have been brutal for me, therefore this post is going to be reasonably short…

Today is the feast of St. Hesychius the Martyr. He was a magistrianus in the court of Maximian (which, at the time of the Byzantine Empire was a kind of intelligence officer). In A.D. 302, Maximian gave an order that all Christians who were royal soldiers were to be stripped of the signs of their office (a belt, in this case) and be forced into civilian life. Many, including St. Hesychius, chose to live without this worldly glory lest they lose the glory of the Kingdom.

Due to his rank within the court, St. Hesychius earned the ire of Maximian who ordered the saint to be dressed in nothing but women’s clothing woven from hair. When given the opportunity to win back his former life, the saint replied, “Your honor, o king, is temporary but the honor and glory which Christ gives is eternal and without end.” In anger, Maximian ordered that a millstone be tied around the saint’s neck and he was then thrown into the River Orontus in modern day Syria. 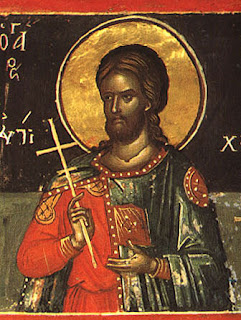 
The local mill has been doing a brisk business of late; however, people have started to disappear in the vicinity of the local river. If the PCs investigate, they can find that the miller found a millstone washed up on the edge of the river. At this same place a sea hag has taken up residence in the river, preying on passers-by.

The millstone is actually a relic, a device used to torture and kill a martyr whose body still sits at the bottom of the river. The stone was preventing creatures such as the sea hag from contaminating the area. While the millstone increases the yield from those who bring their grains to be milled, its proper place is in the river with the martyr.

Should the sea hag be driven away or destroyed, the body of the saint discovered and the millstone returned to its proper place, an underwater chapel will miraculously be built. As long as the relics remain inside the chapel, a Water Breathing spell affects anyone who enters.