Technically, today’s feast was celebrated yesterday because of a rare confluence of events. March 9th is the Feast of the 40 Martyrs of Sebastia; however, today is also the Saturday of the Souls — a penitential day remembering all the dead throughout the ages that trumps any celebration of a saint’s feast. Due to the fact the the 40 martyrs are so beloved, their feast gets moved so that they can be properly celebrated, even though are still remembered today (welcome to the wonderfully complex world of the Orthodox liturgical calendar).

The 40 were soldiers in the Roman army serving in the east. They declared themselves to be Christian when St. Constantine issued the Edict of Milan, which made Christianity legal; however, the persecutions continued in some parts of the empire.

The martyrs were arrested, stripped of their military rank and their clothes, and cast into a frozen lake. A temporary bath house with warmed water was built on shore in order to tempt them. During the night, a soldier named Aglaius was tasked with guarding the forty and receiving any who would deny Christ. He was given a vision of angels bestowing crowns to 39 of the 40. The one without a crown gave up the contest and denied Christ. Seeing this, Aglaius professed himself a Christian and voluntarily climbed into the frozen lake so that their number stayed at 40.

The next morning, nearly dead from the cold, they were thrown into a fire and burned to death. Given my recent rumination on names, I think it appropriate to list all forty: 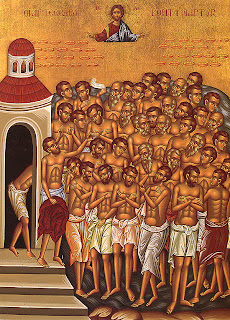 There is an interesting account of the recovery of the relics of the 40 martyrs in the Ecclesiastical History of Sozomen. He claims to be an eye witness to some of the events, which started with a vision granted the Empress Pulcheria by St. Thyrsus. This led to an investigation which eventually led to the discovery of the relics.

This invites a meditation upon the concept of the treasure map, because the vision received by Empress Pulcheria could very well be interpreted as a kind of treasure map and the relics were certainly considered to be a great treasure.

I have given out a great number of treasure maps in my day, even a few that did not look like a traditional map (an icosahedron with clues to various means of finding said treasure, for example), but I have never had much success with having my players actually use these maps (even those meticulously prepared to be really cool props at the table). The only time something of this nature actually ever panned out to having the players actually find a treasure was with a similar situation to that of empress Pulcheria.

For my players, at least, the key to get them to engage such things is a kind of interactivity. A conversation with a saint offers a far more enticing adventure seed than a piece of parchment with an ‘X’ on it. Thus, at my table, the concept of treasure map really needs to be removed from its classical form and be re-interpreted.

Besides a vision of a saint, here are a few ideas for transforming the treasure map into something my players might actually be interested in:


What have been some of your most successful uses of the treasure map concept?