Today is the commemoration of the Return of the Relics of the Apostle Bartholomew. Originally, the relics of the apostle were in the region of Armenian Albanus (modern day Baku in Azerbaijan). Starting in the reign of the emperor Anastasius (A.D. 491-518), however, his relics were transferred to the newly constructed city of Anastasiopolis (modern day Dura in southeast Turkey). They remained there until the end of the sixth century when Persians under the emperor Chozroes conquered the city. 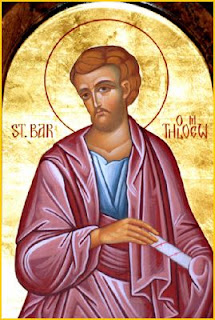 Christians fled with the relics of St. Bartholomew and several other saints (the martyrs Papian, Lucian, Gregory and Acacius), all collected in various chests. Persian priests, however, overtook them as they were traveling on the coast of the Black Sea. The chests were thrown into the water; however, instead of sinking (as they should have — reliquary chests are normally covered in precious metal) they floated out of reach of the Persian priests.

On this date, the chest containing the relics of St. Bartholomew arrived at the island of Lipari off the coast of southern Italy. The other chests would safely arrive in other places around the Italian peninsula (Sicily, Messina, Calabria and Askalon).

This has an adventure, a series of adventures or even an entire campaign written all over it. The relics of several saints have been lost (to invaders? to a cult? to a political faction?). A powerful patron wants them recovered. Depending upon who the stole them, the relics could be in a series of dungeons or other challenging locations. The party would have to follow clues in order to track them all down. In the meantime, other powers could also be interested in getting their hands on the same relics — making the whole exercise a race to see who gets there first. It could even be done in conjunction with this campaign idea.

Too bad my plate is really full at the moment…