Conrad Klinch of Joy and Forgetfulness asked the following question of me:


One of the most popular wargames, Warhammer 40K, makes heavy use of Christian imagery, but warps it rather spectacularly. Do you have any thoughts on that?

Let me preface my answer with a bit of personal background. I had largely stopped playing RPGs in the late 80s and thus most of my gaming budget (both temporal and monetary) was spent playing miniature wargames. In the early 90s I did play quite a lot within the 40K universe (particularly the 2nd Edition of the Spacemarine Epic ruleset). So, I have more than a passing familiarity with the universe; however, I stopped paying attention to GW products around fifteen years ago because I got sick and tired of the constant rule changes, the ever more expensive rule sets and the pricing of figures based on game ability rather than the amount of metal. Thus, if there has been any major changes in the mythology of the universe since then, I am unaware. 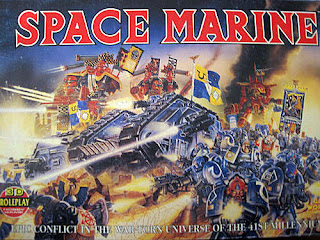 Secondarily, I would also say this about symbology: there is very little in Christianity that doesn’t originate in other cultures. One of the central feasts of the Orthodox Church in summer is the Transfiguration — when Jesus shows his divinity to Peter, James and John on Mt. Tabor. The important part of this event is that this happened through Christ’s humanity. This demonstrates that created matter (our humanity in this case) can be transformed through divine grace. One of the primary purposes of the Orthodox Church is facilitating this transformation, not just in ourselves but the very culture that surrounds us. Thus, pagan symbols and celebrations have been “baptized” and transformed into Christian symbols and holidays.

A classic example is the Cross. In pagan Roman culture, it was a symbol of Roman power and the violent and awful death that awaited anyone who dared defy that power. Through Christ, this symbol has been transformed from an instrument of torture and oppression into a symbol of resurrection, salvation and eternal life.

Thus, one is likely to find Christian symbols within other contexts and cultures used in radically different ways. So, that the 40K universe has symbology similar to Christianity, but has a cosmology that is radically different is no real surprise. For my part, I would view it as my role to transform this symbology and the culture around it into its proper form — Christianity.

Thematically, the 40K universe is not much different than any number of human empires that had at their core a cult of personality. The Roman Empire, for example, had an emperor cult in much the same way that 40K does. Indeed, this cult of personality is a reason that there are fascistic and socialist overtones in the way the 40K universe is depicted. 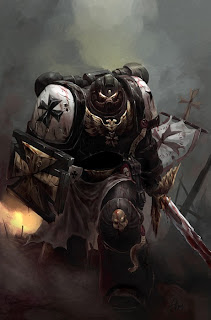 If I were ever to play within the 40K universe again, it would likely be via Rogue Trader, which would allow me to introduce players to the underground Christian Church which has survived (through the grace of the Holy Spirit) alive and well into the 41st millenium. I would couple this with the revelation that the Emperor is one of the primary sources of Chaos in the universe (it helps consolidate his power by giving him an excuse to “protect” so many worlds with his iron fist and constant sweeps of his Inquisitors). Thus, players would be afforded an opportunity to take the symbols of the 40K universe and transform them — give them meaning by restoring them to their proper orientation towards God.