Saintly Saturday: The Miracle of St. Spyridon at Corfu

Today is the commemoration of a miracle performed by St. Spyridon at Corfu in 1716. St. Spyirdon is a 4th century saint from the island of Cyprus. He is normally depicted wearing what looks like a basket on his head. In fact, this is the traditional head gear of shepherds on the island during his lifetime. Originally a peasant shepherd, he was eventually elected as bishop of Trimythous in Cyprus. He attended the First Ecumenical Council and despite his lack of formal education was one of the most eloquent defenders of orthodoxy against Arianism. 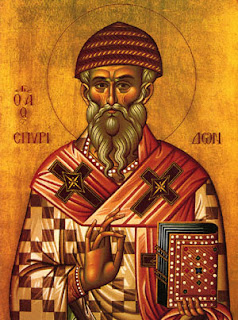 His relics were originally transferred to Constantinople when Saracens conquered Cyrpus (beginning in the 7th century). His body was discovered to be incorrupt. When Constantinople fell, they were taken to the island of Corfu (one of the Greek islands in the Ionian Sea) and are still there today.

In 1716, the island of Corfu was under Venetian rule, but was being threatened by the Turks, who managed to gain a beach head and laid siege to the city. St. Spyridon was seen by Turkish soldiers walking through their camp at night holding a torch. This vision sent the Turkish forces into a panic and the siege was lifted after only 22 days. To this day, St. Spyridon is referred to as the Keeper of the City in Corfu.

While it might be tempting to dismiss this story as fancy, St. Spyridon is known as a “walking saint.” Every year the shoes that he wears must be replaced, because they get worn out — exactly as a pair of shoes would if someone were walking in them. It is taken as a sign that Spyridon regularly goes for walks about the island — wearing out his shoes.

As an aside, the island of Cyprus would be an awesome basis for a campaign. Due to its strategic placement in the Mediterranean, it has been conquered by a wide variety of cultures:


Thus, there are plenty of ruins from all kinds of cultures to explore. To boot, there are archeological finds in Cyprus that indicate some interesting fauna, including dwarf elephants and dwarf hippos.

These humble looking footwear appear as old shoes, worn and full of holes; however, they do have a dweomer of magic about them. The effects of the shoes are based upon the alignment of the wearer. To all who wear them, they fit perfectly and are perfectly comfortable footwear despite their appearance. If the wearer is Lawful, the shoes provide protection from inclement weather, produce no tracks and reduce the need for rations by half. If the wearer is Chaotic, the shoes cannot be removed without a Remove Curse spell. During inclement weather, the wearer must Save vs. Poison or contract a disease. Regardless of the terrain, the wearer will leave obvious tracks that cannot be hidden and will remain for 1d6+1 days. In addition, ration consumption is doubled.