The name Panagia Paramythea (roughly translated as All-Holy Comforter) refers to a miraculous icon of the Virgin Mary found on Mt. Athos at the Vatopedi monastery. It is differentiated from the most common icon of the Virgin Mary because rather than looking towards the viewer’s right and having the Christ child blessing, as in this icon: 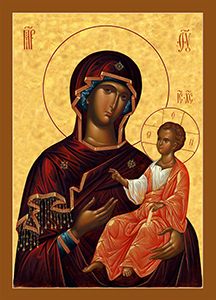 the Virgin is looking to the viewer’s left and is pulling the Christ child’s hand away from her mouth: 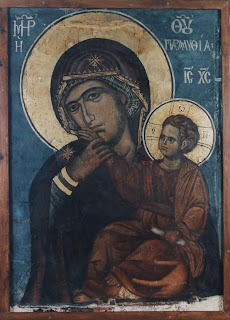 On January 21, 807 pirates had secretly landed on shore near the monastery. In hiding, they were waiting for the gates to open in the morning to launch an attack. The abbot, alone in prayer in the chapel where the icon was heard the Virgin Mary warn him of the impending attack:


Do not open the gates today, but go up on the walls and drive away the pirates.

Looking up at the icon, from where he heard the voice, he saw that the Virgin had turned her head toward him and the Christ child was reaching up to cover her mouth (the icon originally looked like the first icon above). Christ then spoke:


No, Mother, do not watch over this sinful flock, let them fall under the swords of the pirates and be punished as they deserve.

The Virgin then reached up and pulled Christ’s hand from her mouth to repeat her warning. The monks, thus forewarned, were able to repel the pirates and the icon has remained as seen above in the second icon ever since.

This is another feast that is personal to me, because I have spent time at Vatopedi and I have seen this icon with my own eyes. Today it has been given a protective, silver cover but one can still see the faces of both the Virgin and Christ as they were when this miracle happened in A.D. 807.

From a theological point of view, this icon and others that have similarly changed from their original form, reinforce what Orthodox Christianity believes about icons — they are the personal presence of Christ and the saints depicted. The Virgin and Christ could speak through the icon because they are personally present through the icon.

In context of my musings this past week on the Mythical Underworld and Mythical Geography, this particular icon demonstrates that, at least within a Christian context, the ever changing nature of the The Dungeon need not be malicious. As levels and sub-levels are cleared, positive transformations can come upon those areas explored. It also demonstrates that Sword & Sorcery, Horror and Weird Fantasy do not have a monopoly on the weird.