Today is the feast day of St. Phanourios. He is a popular saint amongst the Greeks and his popularity stems from his name. Phonetically, the name is very similar to phanerono which means to reveal. Indeed, what we know of St. Phanourios was revealed in an icon discovered in the ruins of a Cretian Church in the 15th or 16th century. It depicts various events of his life and the tortures he endured as a martyr. He is depicted holding a tapered candle, because these were one of the tools used to torture the saint. Ultimately, it appears, he was burned to death. 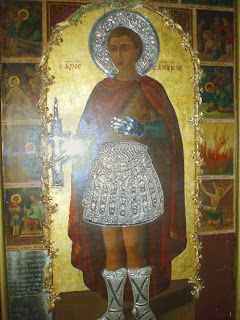 Greeks, because of the similarity of Phanourios to the word phanerono, will often seek the saint's help when they have lost something. Such prayers more often than not reveal the lost object's location.

These objects appear to be normal beeswax candles; however, they give off an aura when Detect Magic is cast upon them. When the user lights the candle and makes an intercessory player to St. Dezvulaire to locate a certain object, the candle acts as Locate Object spell. The flame will "lean" in the direction of the desired object. Each candle will burn for up to 2d6 turns. Multiple uses are possible, as long as there is still candle to burn.